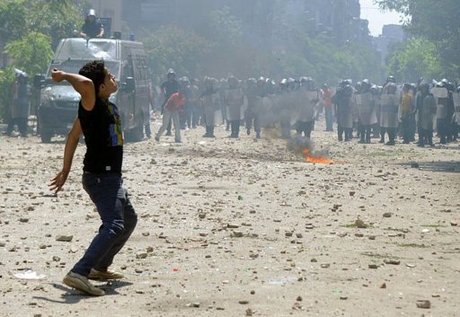 Hundreds of people torched police cars and tried to storm government buildings in the Egyptian city of Suez on Wednesday, after a court confirmed the bail of police accused of murdering protesters.

The protesters, who included families of victims who died in protests that ousted president Hosni Mubarak, were furious when a court rejected the public prosecutor's appeal against a decision to free the police officers on bail.

On Monday, a court bailed the seven officers sparking clashes in Cairo, where the trial was being held because of the sensitivity of the case in Suez.

The seven are among 14 facing trial over the murder of 17 protesters and wounding of 300 others. The other seven are on the run and being tried in absentia.

The case comes amid heightened tensions in Egypt over the handling of legal proceedings against security forces who used deadly violence in the uprising, killing 846 civilians and wounding thousands, according to official figures.

Activists are calling for protests on Friday against the slow pace of justice and calling for those responsible to be punished.

Mubarak was forced out of office on February 11 following 18 days of protests.

Egypt's new government, led by the military, has sought to calm the situation by announcing the creation of a fund to assist victims' families, which it said on Monday would be worth about $16 million.