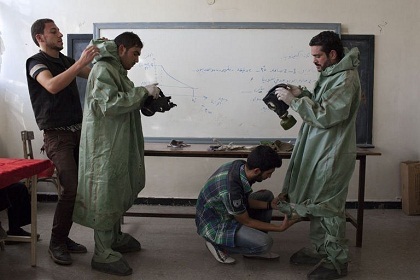 Syria rebels possess ground-to-ground missiles and sarin, and a U.N. report on chemical weapons use shows they carried out attacks near Damascus, a high-ranking Syrian security source said Tuesday.

"I categorically deny that we have used sarin gas, for the reason that we had no interest in doing so. We were winning in the battlefield," the official said a day after a U.N. report on an August 21 attack was published.

"It is generally the losers who adopt such a suicidal attitude. On the contrary, the army was winning," he told AFP.

The U.N. investigation team said in its report that it had "clear and convincing" evidence that sarin gas was used in an August 21 attack on rebel areas near Damascus, and that chemical weapons have been used on a "relatively large-scale" in the 30-month-old Syrian conflict.

The U.N. report does not say who used the weapons, though the opposition and its allies have blamed Assad's troops.

According to the Syrian security source, "the terrorists locally manufacture ground-to-ground missiles, and it is highly likely that they used them to transport" the toxic chemical sarin.

President Bashar Assad's regime has systematically referred to opponents and rebels fighting its loyalists as "terrorists".

"Of course the rebels know how to load missiles with sarin. They have been trained by the U.S., French and British secret services, which are active on the ground," said the source.

Asked why the Syrian army stocked chemical arms, he said: "At a particular time in history, there was the desire to have this kind of weapon to create a strategic balance with Israel.

"It was nothing more than a way to dissuade the Zionist enemy, which has an arsenal of weapons of mass destruction."

Bless your logic "high" ranking syrian security official. Yes, it is generally the losers who adopt such a suicidal attitude and cheap inhumane practices. I remember when we studied history how when the United States was losing the war during WWII it resorted to dropping the atomic bombs over japan. The trajectory of the missiles clearly showed they were fired from Mecca, crossing over Qasioun mountain top, and landing on rebel controlled areas to give the impression they were fired by the regime forces. The truth has finally come out for everybody to see. Just ask madame Buthaina Shaaban, God bless her!