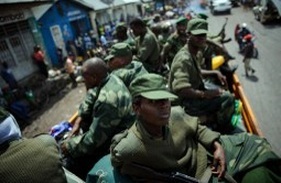 The leader of the M23 rebels in the eastern Democratic Republic of Congo on Sunday urged all fighters to "immediately end hostilities" with army troops.

M23 president Bertrand Bisimwa said in a statement his aim was to "allow the continuation of the political process" with Kinshasa in a bid to end the insurgency.