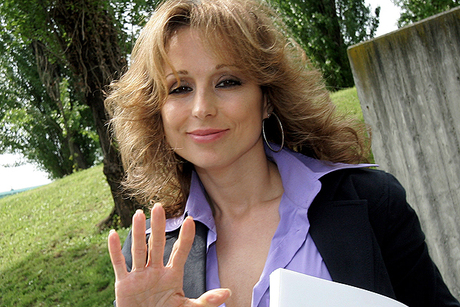 Silvio Berlusconi's daughter Marina, touted as his possible political successor, was given a boost in a poll published Sunday showing that the flamboyant ex-premier's supporters think she is prime minister material.

Some 65 percent of voters for Berlusconi's People of Freedom (PDL) party think 47-year-old Marina Berlusconi "would be suitable for the office of prime minister", according to the SWG institute poll published in the Corriere della Sera daily.

The sentiment was shared by 57 percent of the center-right.

Speculation is rife in Italy over whether Berlusconi, embroiled in a series of court cases, is planning to hand over the reins of his party to his eldest daughter -- though she has repeatedly denied an interest in entering politics.

Berlusconi's conviction for tax fraud earlier this year and an upcoming Senate vote on whether to expel him from parliament have threatened to weaken his grip on his party, and Marina appears to be the only choice for successor.

His former protege Angelino Alfano led a revolt against Berlusconi's hardline allies earlier this month, a betrayal the mogul has not forgiven.

Marina, who sits at the helm of the Berlusconi family's powerful holding company Fininvest, has refused so far to give up her business career.