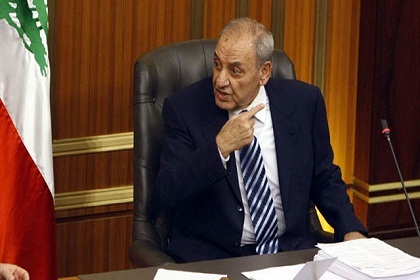 Speaker Nabih Berri has refused to discuss about fears that next year's presidential elections were under threat, saying he would deal with the issue when the Constitutional deadline approaches.

In remarks carried by al-Joumhouria newspaper published on Saturday, Berri said that “he would discuss about the elections before March 25, when the 60-day Constitutional deadline for the election of a new president starts.”

There are fears that differences and lack of consensus among rival political parties would prevent the parliament from meeting and would lead to a vacuum in the presidency.

Under article 49 of the Lebanese Constitution, the president shall be elected by secret ballot and by a two thirds majority of the 128-seat parliament.

After a first ballot, an absolute majority shall be sufficient.

Berri reiterated that he backed calls made by some politicians for the resigned cabinet to convene to approve oil exploration bills.

“It is an urgent issue and Lebanon's share in the Exclusive Economic Zone has come under threat over the Israeli encroachment,” he said.

The speaker confirmed that he had asked the United Nations to draw a “White Line” on Lebanon's maritime borders similar to the U.N.-drawn Blue Line on the Lebanese-Israeli border.

Berri stressed it was urgent to form a new cabinet.

He reiterated his criticism of the March 14 alliance for its rejection of a proposal for the coalition to get nine ministers in the government similar to the March 8 alliance.

Under such a formula, the centrists – President Michel Suleiman, PM-designate Tammam Salam and Progressive Socialist Party chief Walid Jumblat – would get six ministers.

March 14 should take the opportunity of getting veto power in the cabinet and agree with the 9-9-6 formula, Berri told al-Joumhouria.

Berri, who has recently made a several-day official visit to Tehran, said that his trip was aimed at encouraging rapprochement between Iran and its neighbors.

Berri denied however that he was mediating for better ties between Tehran and Riyadh.

“Iran and Saudi Arabia are big states and have their own means to contact each other,” he said.

Wow, what a smart man!? Surely he has no respect to the Presidential office.