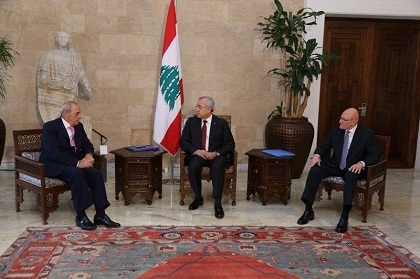 Prime Minister-designate Tammam Salam announced on Saturday the formation of a 24-minister cabinet, ten months and a week after his appointment.

The ministers have been distributed equally between the rival March 8 and 14 camps and centrists of President Michel Suleiman, Salam, and Progressive Socialist Party leader MP Walid Jumblat.

The government formation efforts were facilitated when former Prime Minister Saad Hariri voiced his bloc's willingness on January 17 to join a government of national unity with Hizbullah and its allies, despite its strong opposition to the group's military intervention in Syria.

The Lebanese Forces of the March 14 camp was not granted any ministers after it had announced its boycott of a cabinet that includes members of Hizbullah.

The line-up was revealed after a meeting on Saturday morning between Suleiman, Salam, and Speaker Nabih Berri at the Baabda Palace.

The formation of the cabinet should help ease fears that over the postponement of the presidential elections that are scheduled for spring.

Suleiman's term ends in May.

The main obstacles in the formation of the cabinet in recent weeks lied in Free Patriotic Movement's rejection to relinquish the Energy Ministry portfolio and Hizbullah's appointment of former Internal Security Forces chief Ashraf Rifi as interior minister.

The line-up is as follows:

Now let's get to work.

The first step for Lebanon to a bright future and peace to all Lebanon.

Lets all be together and build a just and great country.

Agreed. Good luck and God speed. Hope for Lebanon's sake this government can be productive and not vindictive.

so m14 got the telcom after all, and rifi got a portfolio?... so aoun wad fighting for basil to have a portfolio, not to keep the telcom from being robbed?

Yes they have to.

And now we all stand and congratulate the same thieves and thugs once again...yes wow they all are heroes now for forming a government!! Give them medals please!
Pathetic! Sheep sheep sheep!

Ok, this is the easy part wait till they agree on the ministerial statement, is say 2016esh..

Yalla il mohim we got rid of that previous freak show government. Statement no statement who cares.

correction: Indeed they are sheep

yeah southern, i also love it when they put Islamic in front of resistance....btw, do followers of the resistance include their sect in the CV if they want to join the resistance???

And again, please i know the south is poor but have u been in akkar recently? Just look on the tv if u didnot.. It is not exactly parydise, nor arsal, tripoli, bekaa.. Stop the "we were left over by the state"crap!!
Man really go hv some chupachups...

Finally, eventhough i wished no gov will be formed with hezbollah AS LONG as they are in syria and not readdy to discuss arms, i wish this governement will bring stome stabilty to the country..
Some mabtrouk for all of us guys, cupachups lal jami3....

southern. There are two people who dont have a sect. (the last 2 people alice and ramzi)
maybe they are hindu or jewish...

No place for women ministers in Lebanon??? Where are you Lebanese women,some of you are
Supposed to be very well qualified for this job,and the country needs a feminine leadership...in many fields.
This is to be your "cheval de bataille" and stop nagging behind!

when will we see them in their white suites for the photo.

Its blue suits because we are in winter.

Yes yes all moustkball march 14 takfiri's zionist iperialist ksa fault...
Hezbos are so democratic, so working for lebanon sake with no link to foreign or sectarian agenda at all...
In anyway mabrouk the governoment to u to, i hope it will at least bring some stability to the country..
But will really help to bring some stabilty might be hezbos going out of syria?.. No?..
Mabrouk to u too flame, now go have some chuoachups man...

Chupa chups for all!! Save the ornage one for phlem!

:)))
Bravo'plus one for u bro...
And again mabrouk the new gov, hope it will bring some stability maybe now hezbos can make a nice move and cone back home so we try to get out from this shit a litle...
Chupachups everyone....

How is this good news? The same thugs redistributed.

Ah well, the achievement is this, we did not need to have them ministers go to Doha or to Taef or to Damascus to get this crisis solved. It seems that old habits die hard, when sheep are used to being told where to go to, to solve a problem, it's a little bit like the East Europeans of then, could not think on their own but to get the order from the Kremlin. Our lot here are the same, except their appetite for cash does blind them and those behind them too. Anyway, let's look at the bright side of things, the white smoke is out, we have a new government. I feel in some ways happy and why? because Mr. Tamam Salam is now PM, we all know this man to be very decent and professional, and a big thank you note goes to president Suleiman, without whom this would have dragged on forever.

All of this is worthless as long as there is no work done. Be it at least working on an electoral law and president elections that will be fair and just.
This governememt is just for a few month not even supposedly till elections again that we all FORGOT that we never had which is the biggesr shame in our history. Anyways any big bloc can make a difference and resign if they re not happy. We will see who are those who will resign from their posts if they dont reach an agreement for electoral laws.

thank you neutral and phoenix1 for the blue suite explanation

Shame on the Lebanese who side weith Syria against their own people.