Return of Jihadist Fighters from Syria Sparks Fear in Tunisia 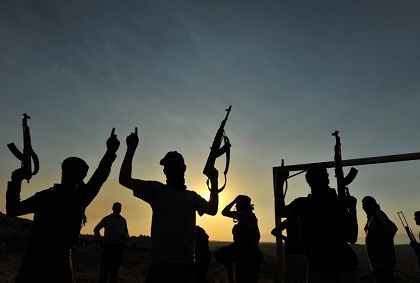 Around 400 Tunisian jihadists have returned from fighting in the Syrian war, the interior minister said, sparking fears that the battle-hardened militants could fuel Islamist violence back home.

Since the 2011 revolution, Tunisia has been rocked by sporadic violence linked to Muslim extremists who were suppressed under the regime of ousted strongman Zine El Abidine Ben Ali.

Numerous Tunisians have joined the ranks of jihadist rebels battling to overthrow the government of Syrian President Bashar Assad, raising fears in the North African country of further violence on their return.

"We have managed to prevent nearly 8,000 people from going to Syria," Lotfi Ben Jeddou said late Monday, speaking after a security and counter-terrorism meeting.

"We don't have exact figures for those who have returned, but they are estimated to number around 400," he added.

Ben Jeddou admitted that the authorities had failed to arrest many of the jihadists who have returned home due to a "legal loophole," without further elaborating.

"But we are following them very closely. We have built up a data base... They have acquired experience and training and must be monitored," he said.

Last year, the public prosecutor opened an inquiry into networks recruiting and facilitating the departure to Syria of young Tunisians fighters.

At the time the interior ministry said it had stepped up airport checks to try to prevent would-be combatants from heading there.

Much of the deadly violence witnessed in Tunisia since the January 2011 uprising has been blamed on Ansar al-Sharia, a hardline Salafist movement accused of having links to Al-Qaida.

Authorities say the group was behind the assassinations last year of two secular politicians, killings that plunged the country into political turmoil, but Ansar al-Sharia never claimed responsibility for those or any other attacks.

And for more than a year, the security forces have been battling Islamist militants hiding out in the remote border regions of western Tunisia, notably in the Chaambi mountains.