Suleiman Says New President Should be 'Strong,' 'Loyal to Lebanon' 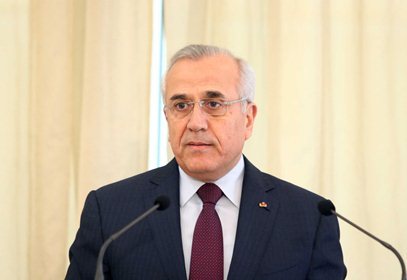 President Michel Suleiman called on Wednesday for the election of a strong head of state, who pledges full loyalty to Lebanon.

“The new president should be strong, not weak… and consensual if possible or should belong to a certain political camp and be fully loyal to Lebanon,” Suleiman said during a ceremony at Baabda Palace.

He should follow up the discussions on the national defense strategy and the Special Tribunal for Lebanon, Suleiman stressed as he launched an administrative decentralization plan.

“We can't build a state without having a defense strategy to protect everyone, including the resistance,” he said.

“The new president should seek to implement the decisions reached at the national dialogue ... including the Baabda Declaration,” he added.

It avoids obstruction of work at state insinuations, allows youth to participate in governance and creates an incentive for good performance, he stated.

Suleiman said the decentralization plan also encourages partnership between the public and private sector, creating job opportunities for the youth.

Suleiman said transparency is a major aspect of the plan. “It would allow citizens to hold officials accountable.”

The president lauded the armed forces on their security plan in the northern city of Tripoli and the areas bordering Syria in the Bekaa Valley, saying they have been successful in thwarting terrorist activities.

But he stressed the importance of establishing a police unit at the level of the district.

Suleiman hoped the decentralization plan would become a draft-law so that the cabinet approves the decree before his term expires on May 25.

We have an excellent person in the name of Demianos Kattar, upon whom I cannot lavish enough words of praise, but suffices for me to say that this man is absolutely decent, clean, highly professional and has vision beyond the scope of most of our dinosaurs here. The only snag here is that Demianos doesn't have a militia.

Baroud is another great, great guy, I absolutely respect him, he too makes an excellent candidate, a real professional, as dedicated and decent as Demianos.

i truly do not understand these calls for a strong president...OF COURSE a president has to be strong ipso facto...ya3ne it is only in our twisted country where a president is weak?!!!!!...phoenix i second your opinion....ziad is a great guy ..i am fortunate to know him personally and all the great work he did with ambassador salam on the electoral laws(especially for expats) which unfortunately a lot of it did not see the light or was implemented (for obvious political agendas)...he would make a great president.

@-phoenix1
I second your opinion.

In other words , No to Aoun and no to Frangieh for they're only loyal to Syria's embattled war criminal the thug Assad .

When you have some "weight" behind you such as the weight of Hezbollah, this will immobilize you ! There is no such thing as a strong & independent president allied to Hezbollah.

And your Baroud / Rifi story is much more complex than you care to imagine.

I'm still waiting to understand why Charbel Nahas showed up with ARMED HEZBOLLAH members at that building !

Empty comment because you are incapable of answering me :)

Poor Bore, he can't understand the difference between stealing a name, and ridiculing it. Ignorance at it's best

I'm thinking of changing it "the_purr" ... because that's as much as he can be threatening and strong :)

Yes Mr. President we need a real leader, not a Saudi puppet such as yourself sir.

Coming from an Iranian puppet, your comment is HAWA !

Hezbollah has no say about our next president. You want to participate in our democratic life, than you need to be "equals" meaning drop your weapons and stop your war.

Otherwise, shut up... people are trying to build this country while you are dismantling and destroying it !

General Aoun, is the best choice for presidency.

Again, Hezbollah has no say in this. In fact, it's weird coming from you because Hezbollah does not even want Aoun as president :)

Having said this, focus on peace and drop your weapons and we will all elect Nasrallah as president !

Drop your Western takfiri zionist propaganda, and we would see peace in Lebanon tomorrow.

You and the rest of them M14 people, kiss some American boots, and bow down to Israel. The Resistance will never do that, so you can take your Defense plan, and American garbage with you.

The only propaganda I do is Lebanese patriotic propaganda. Something you don't understand given you take orders from Iran and your satan Ayatolah and his puppet Bashar.

It's not because you follow foreign powers that I do to.

You want peace, your weapons (or lack of them) is the only key to peace !

If you were a real patriot, you would support the Resistance, that defended Lebanon. When nobody else had the guts, i sense rather you are pro Saudi American. You probaly don't even live in Lebanon or near it.

@Mystic : Not only did I support the resistance, I offered shelter, food, water, beds for 40 displaced people from the resistance !

You have no lessons of patriotism to teach me !

And if you sense that I'm pro-american / Israeli or whatever other BS, then the drugs your harvest and consume must be messing you up !

We, Lebanese patriots, are the REAL RESISTANCE against foreign influence and that includes Israel, Iran, Saudi and US !

I have a hard time believing you did that. Your words only helps Israel/US and Takfiris, so it doesn't matter how neutral, you want to appear, your words truly proves the opposite.

@Mystic : I could not care less what you believe. Belief doesn't equate to truth. You have no problem believing the lies of Hassan Nasrallah...

And my words only help Lebanese. Where do you see they help Takfiris and Israelis ?

Being against the fake resistance and their weapons does not mean supporting Israel or Takfiris. It only means supporting a free, strong and sovereign Lebanon. Something Hezbollah should be fighting for when the only thing you do is find ways to prevent this from happening ! You don't respect our country, our borders, our constitution, our laws and our sovereignty ! So why should we have any respect for you party ?

Aha, so mostaqbal and Geagea are not liars? When did Sayed Hassan ever say something, that he didn't do? Thats why people admires him, because he stands behind his words, while your corrupt leaders, gets fed by the US and Saudi Arabia.

This is my personal vote as Lebanese, that has nothing to do with Hezbollah.

So you're ready to go against Hassan Nasrallah's wishes ?

Wow, this is progress !

You are a Hezbollah dissident !

Nope I'm a Lebanese Citizen, whether you like it or not. I lived here while your parents fled with you to America or another western country. Resistance has no say in the matter, because it's whatever people want to vote, it's their choice. I vote for General Aoun or Sulaiman Franjieh, because they are part of the Resistance bloc too.

My dear Mystic ... you can shove your assumptions where the sun doesn't shine. Never fled the country and never will. Whoever flees the country does so because they give in to terrorism including Hezbollah terrorism.

And the people unfortunately are not allowed to vote. It's the parliament that votes for the president.

And the parliament should not be allowed to vote because it's no longer representative of the people. There should be parliamentary elections before electing a new president.

Over half the population voted against Hezbollah's weapons.

In fact, most Aounies and many many Hezbollah supporters are against the weapons.

And the resistance stopped being a resistance when it used its weapons inside Lebanon. And then inside Syria.

It's no longer a resistane.

And it's not a Lebanese resistance. It's an ISLAMIC resistance which is AGAINST THE principles of the STATE OF LEBANON!

Where do you have those statistics from? The Resistance are the reason the Lebanese border was sealed, and the reason Lebanon isn't part of some Wahabi Khalifah today, but i guess your true intentions was to turn Lebanon over to the takfiris?

Which Lebanese border ? The south ? Wrong ! UNIFIL is the only reason the border is sealed.

The eastern border is wide open and this is also due to Syria / Hezbollah using it to smuggle drugs and weapons.

And you don't need statistics to know these facts when you mingle with people from Hezbollah and Aounists all the time.

You think Hezbollah supporters like to be considered as terrorists ? Do you think they enjoy watching their children fight wars they do not understand and die for other countries ? You could not be more disillusioned !

Purist "Aounists" believe Aoun is no longer a Aounist and hate their alliance with Hezbollah. They hate Hezbollah altogether and believe Aoun has lost his ways. Just talk to people and you will figure out the harsh reality.

Why do you think Hezbollah did everything to postpone the parliamentary elections before M14 leaders even talked about this ? Because they would have lost big time whichever way you cut out our little country !!!

Your personal hate to the Resistance, has nothing to do with the rest of the Lebanese people, I knew you were pro zionist, and you know i'm pro Resistance, so why do you waste your time?

@Roar : it's funny when you often see ads for "hunting" rifles on OTV :) They are already armed since long before the war ended. Don't worry about that Roar. Houses are already full of ammo, guns, rifles and grenades...

The only reason Tsunami backed out is because M14 did not agree to make him a defacto president. So he thought the easy way out would be to ally with Hezbollah.

Very big mistake ! He's still biting his fingers to today and regrets his choices but is too proud to back away.

And please, explain how Hezbollah, Iran's army in Lebanon and Syria's #1 partner in Lebanon are "more in line" with an "independent Lebanon". The regime we kicked out in order to make Lebanon independent !

Ha ha! Mr. President, as soon as you put in that requirement of "being loyal to Lebanon", you pretty much eliminate 93% of the political sector.

"Suleiman Says New President Should be 'Strong,' 'Loyal to Lebanon'".

In other words, the complete opposite of Suleiman.

Is Beri a power hungy snake F.D? How about SHN? If they are, how come n your 1000+ posts you never criticized them? Are you Secterian F.D.?