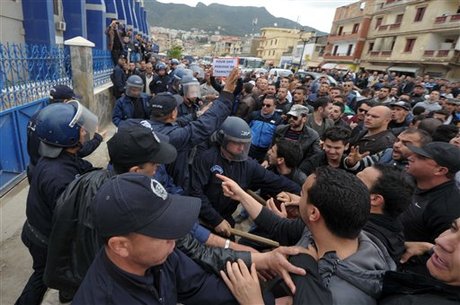 Algerian police beefed up security and arrested about 20 people on Sunday at a campaign rally for President Abdelaziz Bouteflika's re-election, a day after violence ended a similar gathering.

Dozens of students hostile to the ailing 77-year-old's bid for a fourth term tried to demonstrate ahead of the rally in Tizi-Ouzou, in the mainly Berber region of Kabylie east of the capital.

"Free and democratic Algeria!" and "Boutef, pull out!" they chanted of the veteran leader, before police arrested about 20 people, journalists said.

Abdelmalek Sellal, the former prime minister who is Bouteflika's election campaign manager, then arrived to address the gathering of hundreds of supporters.

Bouteflika is widely expected to clinch another term in the April 17 election, but without taking to the campaign trail because of concerns about his health.

Tensions over his re-election bid turned violent on Saturday when protesters stormed a campaign rally in Bejaia, also in the Kabylie region, and torched portraits of him before attacking a television crew covering the event.

In 2001, 126 people died in Kabylie during violent clashes between the security forces and Berbers protesting about discrimination, poor living and working conditions and alleged government corruption.

"I regret that this campaign is taking place in a climate of tensions," Benflis said in a statement issued Sunday at a rally in his hometown of Batna, in another mainly Berber region, the Aures.

"I have to be honest and say nothing has been done to ensure it is taking place in a calm and serene" atmosphere, he was quoted as saying.

"I call for the respect of freedom of expression in all circumstances, a value which is the cornerstone of my policy of national renewal."

Bouteflika's campaign headquarters blamed the violence on the Barakat movement (Arabic for 'That's Enough') formed to oppose his candidacy.

Sellal and other Bouteflika aides have been doing the leg work for the president, who is too frail to campaign after a mini stroke last year confined him to hospital in Paris for three months.

The defense ministry, meanwhile, said the army killed an armed Islamist and seized weapons and equipment in a raid Saturday on hideouts in Jijel area of Kabylie.