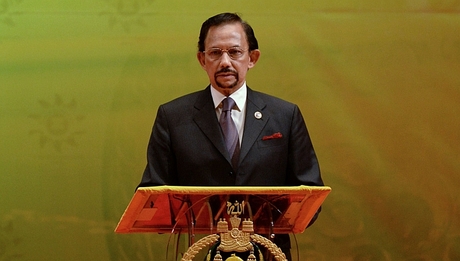 The Sultan of Brunei announced that a controversial new penal code featuring tough Islamic criminal punishments that has been criticized by UN human rights officials would be phased in from Thursday.

"Today... I place my faith in and am grateful to Allah the almighty to announce that tomorrow, Thursday May 1, 2014, will see the enforcement of sharia law phase one, to be followed by the other phases," Sultan Hassanal Bolkiah said in a speech.

Sharia-law penalties will be introduced over time and will eventually include flogging, severing of limbs and death by stoning for various crimes.

The 67-year-old Sultan, an absolute ruler and one of the world's wealthiest men, is a father-figure whose word is unquestioned in the sleepy oil-rich country of 400,000.

While many members of the Muslim ethnic Malay majority have voiced cautious support, the sharia move has sparked concern among many non-Muslim citizens and led to a rare burst of criticism by Brunei social-media users earlier this year.

The sultan responded by ordering a halt to such criticism, which has largely gone silent.

But authorities appear to have been taken aback by the reaction, and a planned April 22 start was postponed without explanation.

"Theory states that Allah's law is harsh and unfair, but Allah himself has said that his law is indeed fair," the Sultan said in comments apparently aimed at critics.

The U.N.'s human rights office said earlier in April it was "deeply concerned", adding that penalties such stoning are classified under international law as "torture or other cruel, inhuman or degrading treatment or punishment".

Nearly 70 percent of Brunei's 400,000 people are Muslim Malays while about 15 percent are non-Muslim ethnic Chinese.

Officials have said sharia cases would require an extremely high burden of proof and judges would have wide discretion to avoid sharia punishments.

The sultan has warned of pernicious foreign influences such as the Internet and indicated he intends to place more emphasis on Islam in the conservative Muslim country.