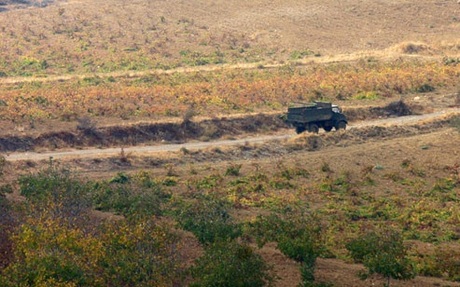 Hizbullah members on Saturday clashed with Syrian gunmen who tried to infiltrate the Bekaa town of Brital, LBCI television reported.

"A clash erupted between Hizbullah members and armed Syrians in Brital when the gunmen tried to infiltrate Brital,” LBCI said.

It noted that several Syrians have been killed in the fighting.

The state-run National News Agency, meanwhile, said that clashes were ongoing in Brital's Ijr al-Harf region near the Eastern Mountain Belt between the residents of the town and Syrian armed men who tried to infiltrate the area.

Later in the day, the "Free Sunnis of Baalbek Brigade” announced that its “free fighters are making Hizbullah suffer losses” in Brital.

"The day in which we will raise the banner of Islam in Brital is nearing, and our battle against Hizbullah is open-ended until we clear the Islamic Emirate of the Bekaa of the party,” it added.

Also on Saturday, LBCI reported that the army arrested a corporal in the Internal Security Forces in the Maarboun plains in the Bekaa.

It explained that he was transferring three al-Nusra Front gunmen in a car without possessing any legal identification documents.

But the ISF later issued a statement denying such arrest.

"These reports are entirely false and we call on media outlets to contact the Intelligence Bureau for accurate information,” the statement said.

"We also call on citizens to check the ISF's website and social media pages to follow up on the institution's news and released statements,” it added.

The Bekaa region has repeatedly witnessed armed clashes between Hizbullah and Syrian fighters since the eruption of the neighboring country's war.

However, the party did not deny or confirm these reports.

Brital has been the center of crime, drug, kidnapping, and car theft activity for many years. It is ironic that we now learn it is officially protected by HA. Many on this forum denied it is a HA hub.

Southern you are right 100%. I hope this works. And then HA needs to stop meddling in Syria and focus on Israel only. You cannot liberate the South and save our Litani water through Homs and Aleppo.

But this is not ex-fpm's point. His point is that usually with all of the crime, carjackings, drugs, theft from Brital, HA usually tries to distance themselves from there.

Now, its HA there against the Syrian Sunni terrorists. Its kind of convenient.

You are 100% right that they are HA when convenient.

southy boy, are you still working on a defense strategy ? still eating fasoulia as part of that strategy?.... your israeli cousins are soon coming back to slap you on your empty skull, the way they did to mystic

he votes josephani up several times too:)

Nice to see in the rest of the civilized world, mankind has advanced everyday with new discoveries thus furthering quality of life. All I ever get from here is blood feud conflict, plenty of regression, and too much religion fueled nonsense. Sad for the innocents caught up in this...it'll be a vicious cycle for a very long time.

Hang the ISF corporal and torture the FSA-Nusra jihadist terrorists.

2 legs bad 4 legs good, for god sake, please lebanese love each other.
we dont need another civil war. Have a dog or cat, you can learn from animals, at least they give you love if you threat them well

If you want sharia law,ok then count after one year how many lebanese with only one hand

you too coolmec for not being objective.

Hi Liberty
I here hope you're doing ok
question for you where was I not objective?

ISF is unfortunatly working with the takfiris to destabilize Lebanon, most of their high ranking officials should be trialed by the so called STL.

oh? really? LOL
only in your empty head they are... any evidence so you can bring them to justice?

No evidence? oh, that is what i thought, only pure idiotic assumptions....