Al-Rahi Back in Lebanon after Controversial Jerusalem Visit, Refuses to Make Statement at Airport 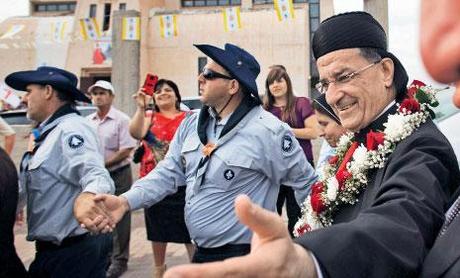 Maronite Patriarch Beshara al-Rahi returned to Beirut on Saturday afternoon after his controversial visit to Jerusalem, but rejected to make any statement upon his arrival at the Rafic Hariri International Airport.

"Al-Rahi returned to Beirut at 4:30pm on board a private jet coming from the Jordanian capital Amman,” the state-run National News Agency reported.

He was accompanied by his envoy Boulos Sayyah and Bkirki spokesman Walid Ghayyad, the NNA noted.

But the same source remarked that the patriarch headed directly to Bkirki without making any statement at the airport, which is contrary to his rituals each time he leaves or returns to the country.

However, his latest trip to the occupied Palestinian territories was surrounded with a great deal of controversy, with many politicians and prominent figures openly criticizing it.

On Friday morning, the Bkirki media office announced also that al-Rahi will not head a mass on Sunday, June 1.

The patriarch has repeatedly defended his visit to the Holy Land.

He added that he was “profoundly hurt” by those who have criticized his historic visit to Israel and the Holy Land.

“Can't we perform our duties? Has compassion died? Have social duties died?” the patriarch asked.

And on Wednesday, al-Rahi celebrated mass with exiled Lebanese at Saint Peter's church in the village of Capernaum on the shores of the Sea of Galilee, where Christ is said to have delivered many of his most famous teachings.

He considered that the Lebanese state must not deal with its citizens who fled to Israel in 2000 as “criminals.”

However, al-Rahi's comments sparked outrage among Hizbullah officials, and Loyalty to Resistance bloc MP Ali Meqdad announced on Saturday his rejection of the presence of “Israeli agents” in Lebanon, adding that the party is “not proud to call them Lebanese.”

Lebanon remains technically at war with Israel and bans its citizens from entering the Jewish state.

But Maronite clergy are permitted to travel to Israel to minister to the estimated 10,000 faithful there.

Sweet Peace READING is fundamental my fine feathered Wahhabi bearded friend "requires a speedy action...On this basis, we issue a call to them to promptly return to their country"

gma-bs-artist, It would be great if some of the publications would do a story on the progress of the memorandum of understanding 8 years latter. It is unfortunate that the MOU did not set conditions against the militia storming Beirut, sabotaging Presidential votes, car bomb assassinations or involving Lebanon in wars.

Better a Rabbi than an Islamo fascist Mullah!

Can you define Islamo facist machia? Does The Resistance force others to convert to Islam? No. Do they keep other religions in Lebanon from following their faith? No.

Does the resistance fight Zionism no matter what sect? Yes.

Unlike the Salafi Al Qaeda in Syria, whom you seem fund of. Removes crosses from churches, and taxes from Christians. So put your Facists comments in Ukraine or Israel where it belongs.

Please see below the definition of Islamo Fascism. Qaeda and Hezbollah are issued from the same extremist source.
So choosing Islamo Fascism (Hezbollah) over Islamo Nazism (Al Qaeda) is not the solution. The solution is for them to kill each other for a very long time. This is great for humanity.

So tell me then, what does the Resistance have to do with "Islamo Facism?" As you so well described it.

Do they force Islam on other religions?

Ever occured to you why Al Qaeda never attacks/attacked Israel?

Hezbollah like fascism has a tendency toward or actual exercise of strong autocratic or dictatorial control. Those who oppose it are brutally assaulted or killed.

Hezbollah and its leaders like fascist and nazi leaders have a tendency to have a violent rhetoric, categorizing opponents as traitors that deserve to die.

Fascism and Nazim lived on war mongering so does Hezbollah and the Islamic Republic of Iran.

Hezbollah is a militia like the SS and the SA and the fascist blackshirts were before taking over.

It has nothing to do with converting people to Islam.

Fashion wise too: Fascists in Italy had the black shirts...Hezbollah too.

This is just a sample of Islamo Fascism.

Ah! Yeah! We hate Ze Amrikan brobaganda. Look Ze Christians and Jewish Iranians are still alive but have to shut up like everyone else or else...
Islamo fascism is alive and kicking in The Islamic Republic of Iran and its militia in Lebanon. Labbayk Nasroullah . Heil Nassroullah!

condoleances for the loss of your brain the resistass....

lol... and hypocrit aounists used to call them terrorists...
they call themselves islamic resistance and have a leader elected for life so yes: they are islamists and fascists!

good to know you are still an idiot, thus as harmless as a bug....

never heard anyone label Hezballah left wing, you're the first one I see calling them that; they are an Islamist conservatives, they are right wing

Fascism: is a form of radical authoritarian nationalism[1][2] that came to prominence in early 20th-century Europe. Influenced by national syndicalism, fascism originated in Italy during World War I, combining more typically right-wing positions with elements of left-wing politics, in opposition to liberalism, Marxism, and traditional conservatism.

Islamo Fascism: The term Islamofascism is a neologism based on clerical fascism which draws an analogy between the ideological characteristics of specific Islamist movements and a broad range of European fascist movements of the early 20th century, neofascist movements, or totalitarianism. In particular, this term relates the widely accepted pathogenicity of fascist belief systems to current radical Islamic belief systems.

They DID NOT chose to run to Israel. Your beloved boss threatened to slaughter them in their beds. Did you forget?

I doubt if one finds worse Takfiris as much as the Hizb and its acolytes. Anyone that disagree with their taking the nation as hostage is a traitor. I may not like and disagree of the visit of the Patriarch, I however do not claim to have the ultimate truth and people may make up their mind and act their believes within the confine of the law. This is something that the Hizb and its supporters do not understand: it is the law that govern relationships and not rhetoric or the force of arms.

This man is really KLebanese! Good for him.

hmmm kinda reminds you of m8 with Sulaiman... when he was towing the line... all hail the president... as soon as he says something the HA does not like.. he is a KSA paid m14 lover..... clean your own house