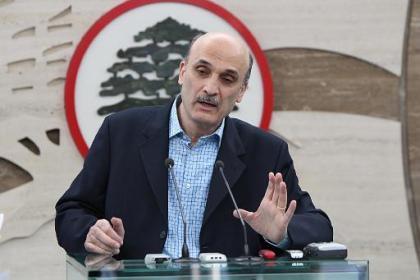 He told the daily: “I had proposed in the past that I withdraw my candidacy in favor of others who have the minimum requirements to carry out political tasks.”

He revealed that he had proposed that Telecommunications Minister Butros Harb and Kataeb Party chief Amin Gemayel run in the elections, but Aoun rejected the suggestion.

“We have no common political ground with Aoun,” added Geagea.

“We have tried very hard with him, but he only has one proposal and that is that he be elected president. We are not willing to go ahead with his plan,” he stated.

Furthermore, Geagea stressed the need for a strong president, “who can find solutions to the crisis, not just manage it.”

“We have had presidents for 24 years who only manage crises. We can not spend another 24 years in such a manner,” he urged.

Moreover, the LF leader noted that Hizbullah is not “upset” with the vacuum in the presidency, “which is caused by Aoun.”

“Aoun does not want vacuum, but he is forced to cover Hizbullah's intentions that seek it,” he told al-Hayat.

“Aoun wants to be president and he will do all it takes to achieve his goal, even if it means obstructing the elections,” remarked Geagea, who is a presidential candidate.

“Hizbullah is not in a hurry to fill the vacuum, while Aoun is biding his time to improve his negotiations chances,” he explained.

Asked why Hizbullah is not being approached to end the deadlock, Geagea responded: “The party does not seek dialogue over resolving the crisis. It will instead reply that we should reach a solution with Aoun.”

Lebanon has been plunged in vacuum in the presidency since the term of President Michel Suleiman ended in May.

Numerous presidential elections sessions have been held, the majority of which however were obstructed by a lack of quorum at parliament caused by a boycott of Aoun's Change and Reform bloc and Hizbullah's Loyalty to the Resistance bloc.

The boycott was prompted by an ongoing dispute with the March 14 alliance over a consensual president.

Aoun has repeatedly said that he is willing to run in the elections if there is consensus over his nomination.

The next elections session is scheduled for July 23.

if you think Aoun is capable president , then we know what your IQ is enough said

flamethrower it is obivious that you are intelligent and knowlegable even if i disagree with you on most topics. When you say that Anoun is the only capable president it tells me you have an agenda. you know better than that. Comments like this is beneath your intelligent.Lebanon needs anew class of young politicians uncorruptable without the civil war baggage, no more Dinosaurs.

I think Aoun should be hung for paralyzing the political process. It is already a bad one no need to make it worse

I don't understand why there is so much anti-Aoun sentiment in the comment boards on this and the daily star. In parallel, that is generally the case with almost all conservative political figures in the United States. These must be Suuni websites... even the reference to an Aoun supporter here is interesting, as it got removed. Half of the comments reference this pro-Aoun statement, yet it is nowhere to be found. Interesting moderation!