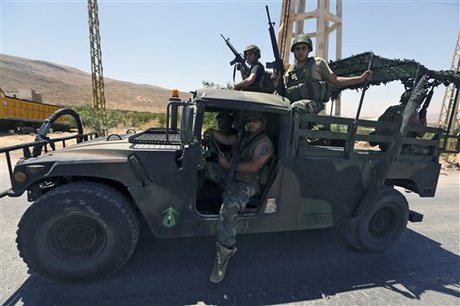 The fate of at least 35 soldiers and policemen, who were held captive by Islamist gunmen in the northeastern border town of Arsal, remains unknown after contacts were lost with them.

According to As Safir newspaper published on Friday, armed men who retreated to Syria from the northeastern border town of Arsal after intensified clashes with the Lebanese army have taken hostage more than 35 soldiers and policemen in an attempt to exchange them for Islamist prisoners, who are held at Roumieh prison's Bloc B.

On Thursday, a delegation from the Muslim Scholars Committee tasked with mediating with jihadist gunmen in Arsal announced that it has lost contact with militants who have taken army and Internal Security Forces personnel captive.

But al-Nusra Front announced later that the soldiers and policemen who are still in captivity have a "special status that will be revealed later."

Security forces and the army have taken recently strong measures around the country's largest prison after reports emerged on an armed takfiri group planning to abduct civilians to swap them with Roumieh Prison inmates and another alleged plot by prisoners to escape from the facility by carrying out a truck bombing.

In July, self-proclaimed caliph Abu Bakr al-Baghdadi vowed to release Muslim “hostages” from jails in Arab countries, including Lebanon, and promised to “liquidate their butchers.”

The shadowy jihadist said the “butchers” include judges, security forces and guards.

Al-Baghdadi heads the Islamic State (IS) group, which led a lighting offensive in Iraq that has overrun swathes of several provinces north and west of Baghdad.

The IS accuses the Lebanese state of being a U.S. and Israeli ally.

In June, the emir of the al-Qaida-linked al-Nusra Front in al-Qalamoun promised in an audio message to free Islamist prisoners in Roumieh “within days.”

Hang the terrorists but before that Rape them Ghaddafi style.. they love it!!!

Making them leave Arsal before handing the captive soldiers was a big mistake.
Now if they succeed to make an exchange, this means the islamists have won the battle despite all the efforts and sacrifices from the lebanese army !
The muslim scholars are part of this scheme and they take sides with the islamists, they shouldnt qualify for mediators, hek they should qualify for pridon. They call the islamists fighters borthers, even Al Rafi3i used the verb martyr to indicate that someone from the islamists died when the scholars convoy came under fire.

Why have these islamist in our prisons anyway.Feeding them and housing them for what? We should eschange them under two condition. Give up thier citizenship and kick them out of the country not to ever return.
They may want that so they can go to their dream land ISIS.

Agreed. Israel has been saying that for years, but the Arab world disagreed.
Now that it has come home to haunt you, you suddenly agree.

how about Abbas Ibrahim?

Who did Abbas Ibrahim negotiate with when he released your pilgrims:)