Rifi Announces Launch of Probe in Tripoli Bombs: Kidnapped Troops to Be Freed without Exchange for Militants 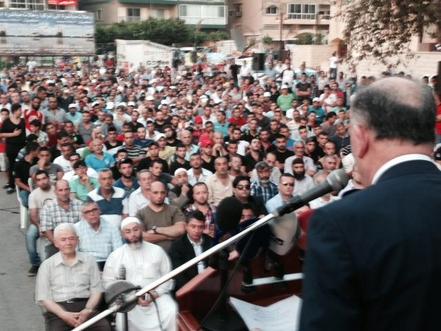 Justice Minister Ashraf Rifi announced on Saturday that the investigation in last year’s double blast in the northern city of Tripoli has kicked off, assuring also that troops kidnapped by jihadists in the border town of Arsal will be released without exchanging them for Islamist detainees.

“I announce to the families of the martyrs, to my people in the city and to all the Lebanese that the judicial investigator started yesterday his probe with the detainees in the mosques' blasts,” Rifi declared in a speech he gave during a commemoration of the double Tripoli bombs of August 23, 2013.

On the same day last year, two car bombs exploded outside the al-Taqwa and al-Salam mosques in Tripoli, leaving 45 people dead and more than 800 injured according to an unofficial toll.

The first bomb struck in the city center at the al-Salam mosque as worshipers were still inside.

The second explosion struck just minutes later outside al-Taqwa mosque, about two kilometers away, near the port.

Rifi continued: “We promise you that we will follow up on this case to achieve justice and to punish the assailants.”

“They tried to silence the city to eventually seize control of it, of the North and of Lebanon... but that blood that was shed was a sacrifice that protected the city and the nation,” he added.

Rifi considered that “it is not strange that criminals have targeted places of worship, as their history is filled with killing and terrorism.”

“Those who committed the worst crimes in Beirut and Syria aimed at targeting the resilience of this city and its religious coexistence through their partners here. But your faith was greater than their hatred and criminality.”

“There is a huge conspiracy planned against the city and the nation...and we must commit to the state’s institutions and avoid getting dragged into chaos and into the implementation of individual security measures,” the northern leader went on to say.

Rifi slammed the regime of Syrian president Bashar Assad as an example of “organized terrorism that killed thousands of people and wanted to transport the fire to Lebanon.”

“But we have prevented (Assad’s regime) from doing this in this dear city (Tripoli) and our people in Arsal did the same,” he noted.

He assured, however, that moderation is capable of confronting terrorism and eradicating it.

Commenting on the Arsal clashes between army troops and jihadist militants earlier this month, Rifi assured that the kidnapped soldiers and Internal Security Forces members will be freed “without any exchange for detained Islamists.”

The soldiers and security forces were abducted by the Islamist militants in Arsal at the end of clashes between the army and the gunmen in the town.

The fighting broke out on August 2 upon the arrest of Imad Jomaa, who is a member of the al-Qaida-affiliated al-Nusra Front.

They ended with a ceasefire on August 7 and the withdrawal of the gunmen with the Lebanese captives.

The Islamists who took part in the Arsal clashes have demanded the release of a number of their colleagues in the Roumieh Prison in exchange for the release of the kidnapped troops.