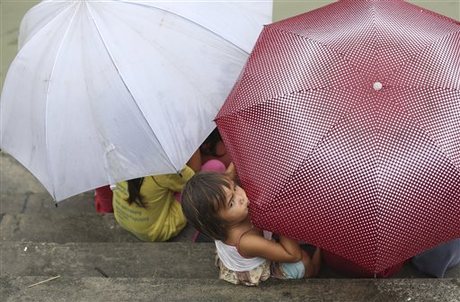 The typhoon, with maximum winds of 160 kilometers (100 miles) per hour, is expected to hit the northeastern side of the main island of Luzon around sundown with residents prepared for the worst, government agencies said.

At least three towns in the direct path of the storm have initiated a "preemptive evacuation", with other vulnerable areas being told to brace for flashfloods and landslides, the National Disaster Risk Reduction and Management Council said.

"I am calling on our countrymen... take proper precautions for your situation and listen to the warnings of your village leaders. Do not wait for the storm to hit you," the council's head Alexander Pama said in a live television broadcast.

He warned that the typhoon might bring storm surges as high as two meters (6.5 feet) to coastal areas.

Such storm surges -- referring to tsunami-like walls of water driven inland by wind from the sea -- were blamed for many of the nearly 8,000 people left dead or missing when Super Typhoon Haiyan devastated large parts of the country last year.

Even people who had taken refuge in government evacuation centers drowned as the water caught many unaware.

The third level of a four-step storm alert has been raised over several northern provinces directly in Kalmaegi's path while lower alerts are in place in surrounding areas, the government weather station said.

The typhoon, moving northwest at 20 kilometers per hour, is expected to pass Luzon by Monday, the weather station added.

The Philippines is hit by about 20 storms or typhoons each year. Typhoon Rammasun killed 98 people and left five others missing in provinces around Manila in July.