Typhoon Kalmaegi Sweeps out of Philippines 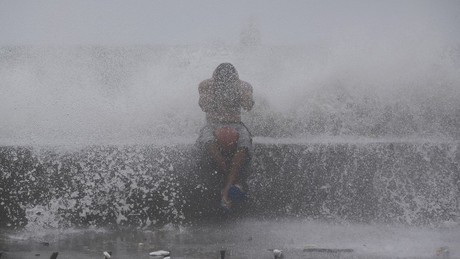 Typhoon Kalmaegi swept out of the Philippines on Monday after causing chest-deep floods in some rural areas but largely leaving the storm-prone country unscathed, authorities said.

The storm, with winds of 160 kilometers (100 miles) an hour, struck the northeast of the main Philippine island of Luzon on Sunday evening, then moved west across land before heading into the South China Sea on Monday.

Six people were killed after a passenger ferry sank in the central Philippines on Saturday evening amid rough weather as the storm approached, a navy spokeswoman said.

But officials said this was not directly linked to the typhoon, and said there had been no reports of other casualties related to the weather.

"We have no casualties... because we gave out advance warnings, because our local chief executives acted early, because we had preemptive evacuation and took our countrymen out of danger," Interior Secretary Manuel Roxas said.

However he also described the storm as only "moderate", and it did not hit heavily populated areas extremely hard. Floods occurred mostly in the mountainous and farming northern regions of Luzon.

About 7,800 people sheltered from the typhoon in government evacuation centers, but Roxas said many of them were returning home soon after the storm passed.

The Philippines is hit by about 20 storms or typhoons each year, many of them deadly.

Super Typhoon Haiyan, the strongest storm ever to make landfall, left more than 7,300 people dead or missing as it destroyed entire towns in the central Philippines in November last year.

In July this year Typhoon Rammasun killed 98 people and left five others missing, mostly in provinces near the capital Manila.