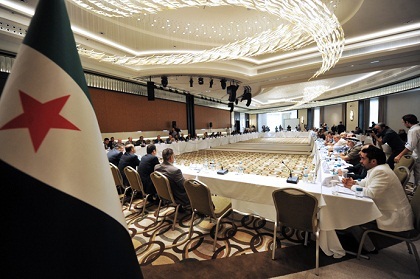 Syria's main opposition bloc failed to agree on a prime minister during a weekend summit in Turkey, participants said, the latest setback for a coalition long beset by internal divisions.

A member of the National Coalition who declined to be named said the biggest dispute at the Istanbul meeting centered around a split between the favored candidates of vital funders Saudi Arabia and Qatar.

The official said that out of 13 hopefuls the two frontrunners were former agriculture minister Walid al-Zohbi -- seen as being close to Riyadh -- and Ahmad Tohme, the provisional head of the coalition who is reportedly backed by Doha.

"Qatar made clear that its financial support to the coalition would end if Tohme was not re-elected," another participant told AFP.

Tohme, who is close to Syria's influential Muslim Brotherhood, headed the coalition for 10 months before being relieved of his duties at the bloc's previous general assembly.

The summit in Istanbul was extended for three days due to the impasse, officials said.

The rivalry between Saudi Arabia and Qatar, two of the most vocal Arab detractors of the regime of President Bashar Assad, has plagued Syria's political opposition since its inception in 2012.

The National Coalition is recognized by scores of states and organizations as a legitimate representative of the Syrian people.

But it has been accused by rebels and activists of being "disconnected" from reality on the ground, as well as of corruption and subservience to its backers in Riyadh and Doha.