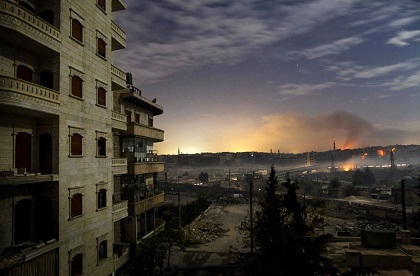 Even for some of the Syrian regime's staunchest supporters, this month's launch of a glitzy new shopping mall and tourism projects seems to have been a step too far.

With large parts of the country ravaged by fighting and hundreds dying every week, the $50 million (40 million euro) projects in the pro-regime coastal stronghold of Tartus have sparked rare criticism from supporters of President Bashar Assad.

It follows a series of unusual public expressions of frustration from regime supporters after the loss of hundreds of soldiers to the Islamic State group and a bomb attack that left nearly 50 children dead in the central city of Homs.

The mall was opened by Prime Minister Wael al-Halaqi on October 9. It includes "seven restaurants, a playroom for children and shops," a government press release boasted, announcing additional "tourism projects" in the city.

The project is a private investment, but has clear regime backing and has caused outrage in online media.

"Ten billion Syrian pounds spent on a mall while injured soldiers are paying for surgery from their own pockets and eating nothing but potatoes and bread," wrote one regime supporter on Twitter.

"Sixty percent of the population of Tartus won't be able to afford to shop there," wrote another on Facebook.

Even someone who stands to benefit from the project -- a tourism sector employee in Tartus who spoke to AFP on condition of anonymity -- admitted it had caused some resentment.

The projects "ignore the feelings of the families of many soldiers from this province who have died," the employee said.

Tartus has been spared the worst of Syria's civil war, which has killed more than 180,000 people and forced nine million more from their homes.

Tartus and fellow coastal province Latakia are strongholds of Assad and the Alawite minority sect to which he belongs.

While not itself ravaged by fighting, more soldiers from Tartus have been killed in the conflict than from any other province in Syria. The regime has long regarded its coastal strongholds as deep reservoirs for recruiting to the army and pro-regime militias.

Faith in Assad himself appears unshaken, but the rumblings have been growing and the shopping mall has become a focal point of criticism.

"The mall has opened and the families of the martyrs can take photos... and the injured can benefit from sales on prostheses. Long live the nation!" read one ironic rant on a Facebook page called "The Forgotten Province of Tartus".

The Syria Report website, which focuses on Syria's economy, said there had been an "outcry from regime supporters" after the announcement.

"Although Tartus Mall is a private investment, ventures of that scale in Syria cannot take place without the backing of a regime official and are therefore perceived as being a source of enrichment for regime officials," the site said.

Jihad Yazigi, director of the Syria Report, said the government's decision to move forward with the projects was part of a long-term approach.

"The regime is trying to show through these projects that 'everything is fine,' that the situation is under control," Yazigi told AFP.

"That's been its policy for three-and-a-half years" since Syria's conflict began in March 2011, he said.

Yazigi said Tartus had become a target for investors because its relative calm had attracted an influx of Syrians displaced from war-ravaged provinces like Aleppo and Idlib.

But what the city's newcomers and residents seem to want most is an end to the bloodshed, and Yazigi said Assad backers had become increasingly angry about government decisions after the fall of several army bases to Islamic State jihadists.

In August, IS seized the army's last base in northern Raqa province, killing an estimated 200 soldiers.

Grisly photos circulated of mass executions and beheadings of troops at the Tabqa base, raising the ire of government supporters who felt the impending jihadist advance could have been predicted and perhaps prevented.

Pro-regime activists expressed anger online, and some even sought to organize demonstrations against the defense minister, General Fahd al-Freij.

In September, five of those involved in the criticism were arrested.

Further outrage from ordinarily pro-regime residents was sparked by a devastating October 1 bomb attack in central Homs against a school in an Alawite neighborhood.

Relatives of nearly 50 children killed in the attack called openly for the resignation of the provincial governor in rare public demonstrations.

The criticism has so far not extended to Assad himself, but marks a rare crack in the regime's bulwark of support.

"People don't criticize Bashar Assad, either because they are afraid or because he is still for them their only option," directing their anger instead at lower-level officials, Yazigi said.

"After all this criticism, I think in the future the regime will think twice before getting involved in new projects."