Clashes Between Army, Gunmen in Bhannine, Four soldiers Killed After Being Ambushed 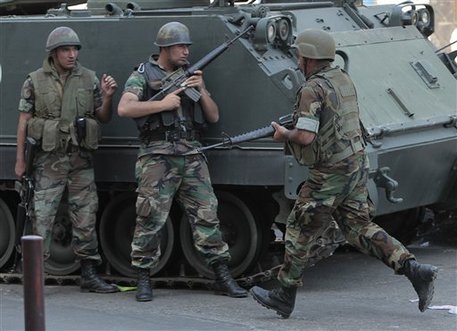 The army continued its military operation on Sunday in the area of Bhannine- Minieh where violent clashes between it and gunmen took place.

The army was ambushed by a terrorist group in Dhour Muhammara which led to the death of four soldiers, including two officers.

The army stated, "During its deployment in the Dhour Muhammara, army troops were ambushed by a terrorist group."

"The army clashed with the gunmen and inflicted a number of gunmen," during the clashes four soldiers, including two officers were killed,” it added.

The army is still chasing the gunmen in Dhour Bhannine - Beit Ajaj - al-Rihaniyya down to the Nahr al-Bared power plant, according to the National News Agency.

"A soldier was killed and another was critically injured due to the clashes between the army and gunmen in Bhannine," it added.

The army used machine guns and rocket propelled grenades, where they killed and wounded several in the ranks of the gunmen, meanwhile they are working to track down the rest.

The clashes renewed, against the backdrop of the ambush.

“The army troops are prosecuting members of the armed group in the orchards, close to where the vehicle was attack," stated the NNA.

Earlier on Sunday clashes erupted between the army and an armed terrorist group in the Bhannine area in the northern region of Akkar.

It announced in a statement that the group attacked the army from its position in the al-Salam-Bhannine school.

A number of gunmen were wounded and others arrested in the ensuing unrest.

The National News Agency identified the group as that of Sheikh Khaled Hoblos.

Several of the attackers managed to escape the scene, leaving behind them a number of weapons and ammunition, continued the army.

The military later managed to take control of the school, arresting a group affiliated with the cleric.

In addition, the military announced that it had seized three booby-trapped vehicles parked near the school where the gunmen were situated.

It also discovered a weapons cache, a number of military equipment, and 50 explosive devices.

On Saturday, at least two army troops were killed and several others wounded in an armed attack on a military vehicle in the Akkar area of al-Mhammara, which was followed by clashes with gunmen loyal to Hoblos and a failed attempt to abduct five soldiers.

The attacks came amid violent clashes between the army and gunmen in the nearby northern city of Tripoli, where two civilians and two gunmen were killed and around 20 troops and civilians were wounded.

For the past few months, the military has been coming under increasing armed attacks, mainly in northern Lebanon.

Since August, the Lebanese army has been fighting militants from the Islamic State group and al-Qaida-linked al-Nusra Front on Lebanon's northeastern border with Syria.

Please pay attention to comments containing insults + dirty words. They should not appear or be removed immediately.
Thank you

Josephani took over this forum lol

you miss flamethrower? what do you miss the insults or logic of his debates?:) Anyway, he is posting his usual with all these fake accounts

The Da3ish American supporters, seems very confused and in panic. Now the Army/Resistance had enough of your little games, it's time to root out the American Israeli plot to destroy Lebanon. No mercy for their takfiri mercenaries.

Lol, desperate Salafists can do nothing than bark out lame insults 24/7.

FT is being treated for a catastrophic major malfunction.

so right you are!

dear esquire, your comment is irrelevant and not necessary true