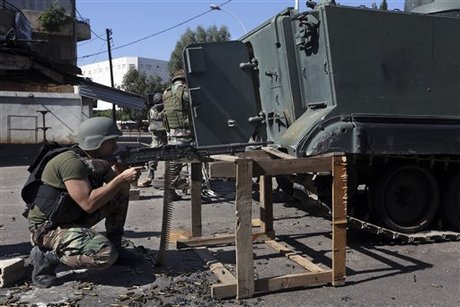 The army continued on Friday raids of areas in the northern region of Akkar in search of suspects wanted for their involvement in recent clashes with the military, reported the National News Agency.

The raids resulted in the arrest of two suspects linked to Sheikh Khaled Hoblos, whose group was involved in weekend clashes with the army in the town of Bhannine in Akkar.

The detainees were identified as F. Ibrahim and F. Hoblos, also known as Abou Omar.

They were arrested after a chase and shootout during the raid on the Zouk al-Habalisa area.

No injuries were reported.

MTV said that weapons and ammunition were discovered in the cleric's relative's house.

Since the weekend's Bhannine clashes, the army has been carrying out raids and setting up checkpoints in Akkar in search of fugitives.

A number of gunmen have been arrested, while others remain at large.

so says the khomeinist terrorist

In 2006, the Caporal asked General Karam to contact the Israelis to get their support to be elected president.
Later the Caporal played the "surprised virgin" and declared that he was stabbed in the back like "Cesar was stabbed by Brutus"...
what a dirty traitor ....an agent...totally corrupt...only blind men cannot see...
Any christian supporting the caporal is helping the destruction of the christians....would you really accept "MUTELATEH" ?????