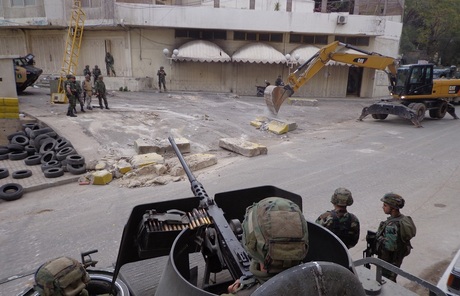 The army carried out raids on Saturday in the north where they arrested a suspected person in Tripoli and seized a weapon depot and issued a security document to arrest Bilal Diqmaq.

The army also arrested during the raid a suspected persons, then handed the suspect to the competent authority and the investigation started.

The army issued a security document to arrest Bilal Diqmaq, after he had issued a similar document few days ago to arrest salafist cleric Dai al-Islam al-Shahhal due to his positions.

This came after the army carried out raids on Friday in Tripoli's Abi Samra on an apartment belonging to the father of Bilal Diqmaq, where they seized weapons and shells.

On Friday, salafist cleric Dai al-Islam al-Shahhal told LBCI, "The weapons found in the residence of Diqmaq belong to our guards and Diqmaq had collected it for them to prevent sedition and problems and we call for returning these weapons.”

Earlier on Saturday, the army arrested a number of individuals wanted on terror charges and for attacking the army, including a suspect wanted for forming a terrorist cell in the North.

It announced in a statement the arrest of Ghali Hadara on charges of forming a terrorist cell and plotting to carry out attacks in the North.

His cell was collaborating with detainee Ahmed Salim Miqati and others.

Hadara had fled to the neighborhood of Bab al-Tabbaneh in the northern city of Tripoli after the military had raided the location of his terrorist group in Bqaa Safrine.

He attempted to escape from Bab al-Tabbaneh after the recent clashes in the city, but the army managed to arrest him.

In addition, the army announced that it arrested Dani al-Dansh for opening fire at an army patrol on May 20.

He is also suspected of tossing hand grenades that led to the injury of some soldiers.

Dansh is also wanted for participating in the recent Tripoli fighting.

He was arrested while attempting to flee Bab al-Tabbaeh by using the identity card of his brother, said the army statement.

Several arrest warrants had been issued against them in the past on charges of theft, drug possession, and involvement in security unrest.

Miqati was arrested on October 23 in the Dinniyeh town of Asoun during a deadly army raid on an apartment that he and several militants had been residing in for several days. Three gunmen were killed in the operation, including defected soldier Abdul Qader Akkoumi.

His confessions came in the wake of fierce clashes that erupted in Tripoli's old souks Friday over a false rumor alleging that Miqati had died during interrogation.

The clashes spread to the Tripoli neighborhood of Bab al-Tabbaneh, where a group loyal to Shadi al-Mawlawi and Osama Mansour was entrenched, and to the nearby region of Akkar where Sheikh Khaled Hoblos led an armed assault against the army.

On Thursday, Miqati and 17 others were charged with the formation of armed groups, recruiting individuals, training on the use of arms and explosives, and plotting to occupy the Dinniyeh region villages of Asoun, Bakhoun, Bqaa Safrine and Sir al-Dinniyeh with the aim of creating an Islamic State emirate.

Karim, I'll get to it before you do today, here goes, God bless the Lebanese Army, soon may it control all the Lebanese territory and get everyone to live under the same and one law, I mean everyone except for the resistance.