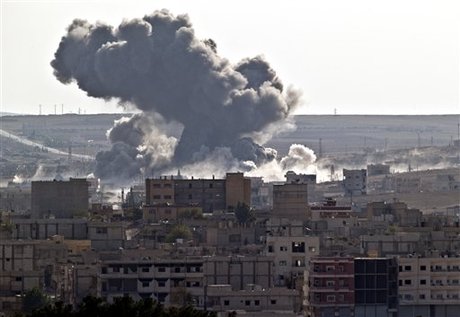 The Islamic State group is locked in a war of attrition in the Syrian border town of Kobane, where Kurdish fighters backed by U.S.-led air strikes are mounting fierce resistance.

Two months after IS launched a major offensive to try to capture the strategic prize on the Turkish frontier, the jihadists have failed to defeat the town's Kurdish defenders.

"Several weeks ago, it looked like Kobane would fall, but it is now clear that it will not," said Romain Caillet, a French expert on jihadist movements.

"IS controls more than half of the town but is unable to advance further," he told AFP.

Buoyed by a string of victories in Syria and Iraq, IS launched a major offensive on September 16 to seize Kobane and expand its self-proclaimed Islamic "caliphate".

The jihadists believed they would quickly conquer the small town in northern Syria, which was little known to the outside world before the deadly fighting broke out.

Even the United States and Turkey warned in October that the town was teetering on the brink.

IS took over dozens of villages surrounding Kobane, known in Arabic as Ain al-Arab, besieging the town's Kurdish fighters.

On October 6, the jihadists reached the gates of Kobane, triggering panic among civilians.

Tens of thousands fled across the border into Turkey in fear of the reputed brutality of the IS fighters.

The jihadists, equipped with advanced weaponry seized from Iraqi and Syrian troops, then fought their way into central Kobane.

But their advance has since faltered in the face of fierce Kurdish resistance and U.S.-led bombings on IS targets.

According to the Syrian Observatory for Human Rights, more than 600 jihadists and nearly 370 Kurdish fighters have died in the battle for Kobane.

The fighting also killed around 24 civilians in Kobane, which used to be home to around 150,000 people, most of them Kurds.

IS "now faces a war of attrition that is costing it more than its Kurdish adversaries", said Rami Abdel Rahman, director of the Britain-based Observatory.

Kurdish forces on Wednesday cut off a key supply route used by the jihadists, according to the Observatory, which monitors the war in Syria through a network of local sources.

Kobane has become a major symbol of resistance against IS, which has committed widespread atrocities and imposed its harsh interpretation of sharia law.

The town's capture would be a major prize for the jihadists, giving them unbroken control of a long stretch of Syria's border with Turkey.

But after IS seized dozens of Kurdish villages and broke the defenses of Kobane in mid-October, "then it fell into a terrible trap," said Caillet.

Initially the United States said it did not consider Kobane to be strategic, but then "U.S. warplanes went into action" launching strike after strike against IS positions, he said.

Every time IS seized a building, positioning dozens of fighters inside, the U.S.-led coalition warplanes would bombard them, killing a large number of militants.

Caillet said that foreigners, including French, Uzbek and Chechen jihadists, have been battling alongside Syrian combatants.

"There were even five French (jihadists) killed in a single strike," he said.

Abdel Rahman said the two sides had remained deadlocked, even since about 150 heavily armed Iraqi peshmerga forces entered Kobane at the end of October to reinforce their Syrian Kurdish comrades.

Kobane has become the scene of "urban warfare in a town divided into two," he said.

Snipers are playing a key role, with jihadists positioned on rooftops in areas under their control and on the battle frontlines, said Abdel Rahman.

He also doubts the town will fall to IS thanks to the "high morale" of the town's Syrian Kurdish defenders and their peshmerga reinforcements.

IS still controls vast areas around the town, but has deployed most of its fighters to the frontlines, leaving its positions vulnerable to attack.

"This is making the group increasingly nervous," said Abdel Rahman.

The fierce fightback has even sparked hopes among Kurds that IS could be driven out of the town.

"We are witnessing the defeat" of IS in Kobane, said Farhad Shami, a Kurdish journalist inside the battleground town.

I support your view Kanaan, let Kurdistan be free and fully contiguous again. ISIL is now having a taste of its own medicine and so much the better. They will feel what it was like being a Nazi soldier in Wintry Russia.