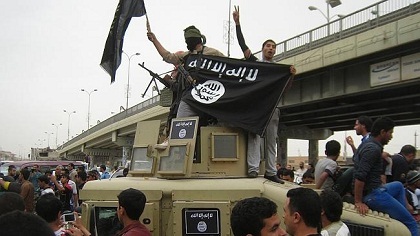 In its latest propaganda video, the Islamic State group tried to project unwavering confidence and unstoppable growth, in what some analysts saw as a reply to a string of setbacks.

A 15-minute video released on Sunday shows the severed head of U.S. aid worker Peter Kassig, who was kidnapped in Syria. His death was confirmed by Washington and sparked global outrage.

The document also includes a highly-choreographed sequence, with professional quality camera work, in which IS members line up at least 18 Syria military personnel and behead them simultaneously.

The video marked a new high in staged brutality by what is considered the most violent group in modern jihad but some analysts saw it as a sign of nervousness.

"The Islamic State remains a potent foe, especially to the millions suffering under its rule in Syria and Iraq, but the group appears disjointed and off-balance," the Soufan Group think tank said in a briefing paper.

"The group has abandoned its disciplined messaging and is now throwing the rhetorical equivalent of the kitchen sink at both its supporters and opponents," it said.

Officials in Washington and elsewhere have suggested that IS may have at least peaked, if not started to retreat, following the expansion phase that came with its June Iraq offensive and subsequent proclamation of an Islamic "caliphate."

"I think you could relate it (the video) to the setbacks IS has had," said Aymenn al-Tamimi, a fellow at the Middle East Forum who is an expert on jihadist groups.

In Syria, more than 700 IS members are already said to have been killed in a so far fruitless effort to conquer a small Kurdish town on the Turkish border.

In Iraq, the group has firmed its grip on the large Sunni province of Anbar but appears to have lost the initiative elsewhere, being forced to defend territory from resurgent pro-government forces who retook the strategic northern town of Baiji last week.

The video was released three days after an audio recording attributed to IS supremo Abu Bakr al-Baghdadi, who was rumored to have been wounded or killed in an air strike.

He "assured" his followers that victory was still within reach and sounded at pains to paint the group as a growing movement winning new supporters every day.

"Secondly, it shows that the group still has hard military power and it is there on the ground and effective now, and can strike anyone, anywhere, at any time," she said.

Tamimi also said the video, which opens with an animated world map purporting to show IS' expanding footprint, was geared to emphasize the pledges of allegiance IS recently received from other militant outfits, notably in Egypt.

"The faces of the executioners being shown are clearly of different nationalities, which is a way of illustrating the group’s international composition," he said.

Among the militants shown beheading the Syrian servicemen were some known foreign fighters, including at least one Frenchman and possibly an Australian and a Dane.

The masked leader of the group of executioners, who in a separate sequence stands above Kassig's head, sounds British and is thought to be the same man who appeared in previous videos of foreign hostage beheadings.

In an interview aired on Norwegian TV Monday, an IS defector speaking from Turkey, said the foreign fighters were causing a rift within the organization.

"They are different because they have money and lived in Europe... So they convince themselves they have to become martyrs and die for God," he said, claiming that most suicide operations were carried out by foreigners.

In last week's purported audio message by Baghdadi, the man who warned his troops would soon march on Rome said its enemies would be drawn into a bloody ground operation in the region.

The Soufan Group argued that IS' latest propaganda reveals a level of desperation, arguing that Baghdadi "is not so much taunting as he is pleading."

"The Islamic State needs to escape from the box in which it finds itself trapped, as well as its inherent compulsion to destroy itself."

BJ, as far as I'm concerned, foreigners make up the majority of those fighting the regime. The Syrians have seen their noble revolution disappear from their sights because of western silly miscalculations. Then lest we forget, ISIL was created by the US, supported by the west and financed by some Arab states. Now that the genie got too big, they're all scrambling to finish it off before it reaches their shores. Tell me what the FSA can do these days, except sit and watch? The moderates lost because the support never came, now it's a catch 22 situation for most, especially the Syrian people.