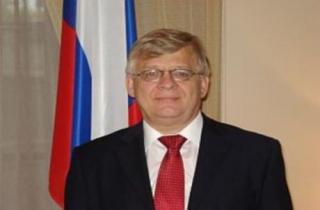 Russian deputy Foreign Minister Mikhail Bogdanov is seeking to end the political deadlock in Lebanon and the rift between the Lebanese arch-foes during his visit to Beirut, Russian Ambassador to Lebanon Alexander Zasypkin said on Thursday.

The diplomat said in an interview with An Nahar newspaper hours before Bogdanov's arrival in Beirut that the visit aims at “exchanging points of view with senior Lebanese officials, including Hizbullah figures.”

He noted that talks will focus on the international, regional and local developments, in particular the issue of the rising terrorism.

“Russia supports the Lebanese state and the army, in addition to stability and security in the country. We deem that the national dialogue is the only solution to the local rift,” Zasypkin told the newspaper.

Bogdanov, according to the diplomat, will encourage Lebanese officials to end the presidential vacuum by agreeing on a consensual candidate.

The political scene in Lebanon has reached a standstill after the parliamentary blocs failed to agree on a compromise head of state. Lebanon has been without a president since May when the term of Michel Suleiman ended.

Concerning Hizbullah's involvement in the war raging in neighboring country Syria, Zasypkin said that the party isn't “the only side that dispatched fighters to Damascus. There are other sides that are supporting rebels with fighters and weapons also.”

Hizbullah has deployed thousands of fighters into Syria to back President Bashar Assad's army as he battles insurgents who have been trying to overthrow him for the past four years.

Asked about a possible arms deal between the Lebanese state and Russia, Zasypkin said that the two sides are still negotiating the delivery of weapons to the Lebanese army.

“For some period of time the matter was frozen... But both sides has been seeking to revive the initiative under a Saudi grant,” he revealed.

He pointed out that several Lebanese delegations headed to Moscow recently to continue discussions over the matter.

Any deal would most likely be financed by a $1 billion Saudi donation that was announced by al-Mustaqbal movement chief ex-PM Saad Hariri in August.

Zasypkin considered that Lebanon has the right to enter a 60-member coalition trying to crush the Islamic State militant group in Iraq and in Syria and seek the help of different sides regarding its battle with terrorism.

However, he noted that the Lebanese state should “benefit from the coalition and highlight its conditions regarding its dissociation policy.”

“We welcome any deal that safeguards stability and security in Lebanon and prevents sedition, but we have to admit that the Syrian crisis highly affected the situation in Lebanon.”

Lebanon has been battling jihadists from al-Qaida-affiliate al-Nusra Front and the Islamic State group after jihadists briefly overran the northeastern border town of Arsal in August.

The IS declared a "caliphate" in areas under its control in June in Syria and Iraq, imposing its harsh interpretation of Islamic law and committing widespread atrocities.

Concern over the rise of IS prompted Washington to form a coalition of Western and Arab nations that has carried out a barrage of air strikes on its positions in Iraq and Syria.

I trust Putin more....much more than the weak Obama.

I am just contemplating a weird situation whereby the Russians are electing a new president, and we Lebanese are in Moscow helping them decide. For a minute it was good to dream, anyway.....