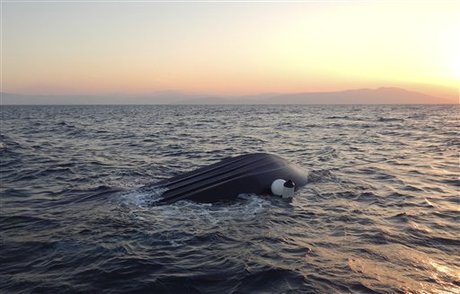 Nine people, including women and children, were killed when a boat smuggling Palestinians from Lebanon's northern port of Tripoli sank in Turkey's territorial waters, one of the survivors said on Wednesday.

The state-run National News Agency said the survivor told his relatives that the boat was carrying 40 Palestinians from Syrian camps, mainly Yarmuk in Damascus, who had taken refuge in Palestinian shantytowns in northern Lebanon.

The boat left the Port of Tripoli on Monday and when it reached Turkey's territorial waters it sank due to overloading, the survivor said, according to NNA.

“The Turkish coast guard helped survivors and took them to hospitals,” he added.

But Tripoli Port denied the vessel started its journey from the facility and it was not clear if the final destination of the migrants was Turkey.

There has been over the last two weeks a dramatic spike in the numbers of migrants -- mainly from Syria, Afghanistan, Pakistan and Africa -- seeking to leave Turkey by sea for Greece in the hope of finding new lives in the European Union.

The U.N. refugee agency has said in the last week alone, 20,843 migrants arrived in Greece, which has seen around 160,000 migrants land on its shores since January.

Some 250,000 migrants have already crossed the Mediterranean this year to Italy and Greece, and the International Organization for Migration said Tuesday it expected that number to pass 300,000 by the end of the year.

The ones who make it to shore are the lucky ones, with 2,440 people having died trying so far this year, according to the UNHCR.