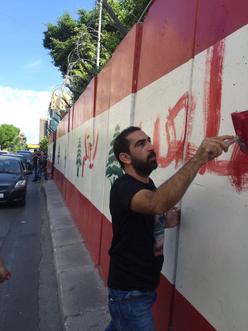 The “You Stink” civil society campaign staged a march from downtown Beirut to the Central Bank in protest against corruption in Lebanon.

The protesters made their way from a Finance Ministry building in downtown and later arrived at the Central Bank in the Hamra neighborhood.

Soon after their arrival, activist Asaad Zebian was arrested with a member of the campaign accusing the security forces of “militia practices.”

The demonstrators promptly blocked the road in front of the Central Bank in protest against the detention, said some media outlets.

An activist later denied the claim, saying that cars are being allowed to pass.

The Internal Security Forces later revealed that Zebian was arrested for defiling the Lebanese flag.

The walls surrounding the Interior Ministry, which is located in front of the Central Bank, are painted with the Lebanese flag.

The protesters later headed towards the Interior Ministry's main entrance at Sanayeh to stage a sit-in.

Zebian was released from custody in the afternoon and the activists ended their sit-in.

The “You Stink” campaign gained prominence in the wake of the eruption of the garbage disposal crisis.

It carried out numerous protests against the problem and later evolved into a movement protesting against political corruption on Lebanon.

Stop blocking our life everyday. We are regular people and want to make end meets.

You Stink are regular people too. They have jobs too and most of the activists are having huge problems with their work.

Noo Bassil is out of this, remember all this to empty the state, to show failing country and new ruler and new rules are coming. Namw it mutjalatheh, name it Hezbolah domenance over Lebanon, all open ...

To ThirTeen, Hizbolah, who can tell if they gave hizbolahthe " big plan " to look at? When Hizbolah was brought in the 1980s Iran Khomaini did put leaders who can and still do anything for the wakeel " Allah" on earth! Changing is gradual as I can see, now let us take some from Christians "Muthalatheh" tomorro from druz later we take the rest and no one will be upset or maybe notice!

There's nothing in this article about the purpose of the protest which was to demonstrate that the finance ministry and central bank are not release public money to clean up the mess that we are all concerned about.