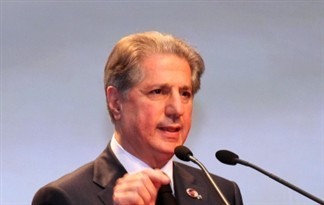 Former head of the Kataeb Party Amin Gemayel revealed that he had made a proposal to Change and Reform bloc leader MP Michel Aoun to end the political deadlock in Lebanon, reported the daily al-Mustaqbal on Wednesday.

He told the daily that he had suggested that the four main Maronite leaders meet to prepare a “joint statement that would pave the way for a joint project” that would resolve the deadlock.

“Any candidate who adopts this project would then be elected president,” he explained.

Gemayel and Aoun had held talks on Tuesday.

Gemayel added however that “Aoun did not respond to his proposal.”

The two officials stressed the need for Christian figures to assume their responsibility towards Lebanon “and avoid shying away from them due to the volatile situation on the regional and international scenes,” said al-Mustaqbal.

“I told Aoun that we should sit together and resolve our problems. We should reassess our stances because it is unacceptable that others assume our responsibilities,” Gemayel told the daily.

The Christian parties of the Kataeb, Free Patriotic Movement, and Lebanese Forces have voiced their objection to the manner in which Franjieh's name is being proposed.

His chances to be elected rose significantly in the wake of a meeting he held in recent weeks with Mustaqbal Movement leader MP Saad Hariri in Paris.

Hariri has been spearheading efforts to elect the Marada Movement chief as president even though his ally in the March 14 camp, LF chief Samir Geagea, is a presidential candidate.

Aoun is also a nominee.

I was watching one of those TOW 2 missiles used in syria, wow, with the abundance of fighters and the use of such guided weapons there will be nothing for HA to have or bring back if they decide to.

Salfis Salafis what is important is that you are blunt in your accusations against Muslims .. wheather Aouni or Hizbolah that would make you what the saint of the wholly Qom? If not, then why your beloved Aoun shuts his already dead brain when it comes to Hizbolah? Salafis yes are equal in filth unless with open and moderate views but I wouldn't take a chance.

Ya Sheik Amin, your talking to a brick wall. There's nothing back behind his eyeballs.