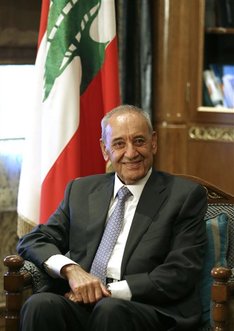 Speaker Nabih Berri stressed on Wednesday the need to end the presidential deadlock in Lebanon.

He said: “The best scenario to resolve the crisis lies in an agreement between Change and Reform bloc chief MP Michel Aoun and Marada Movement leader MP Suleiman Franjieh.”

He made his remarks during his weekly meeting with lawmakers at his Ain el-Tineh residence.

“The persistence of the current situation in Lebanon only benefits terrorism that is lurking around us,” warned the speaker before the MPs.

Berri therefore urged the Lebanese people to take advantage of the circumstances in the country and resolve their own problems.

Recent efforts to end the deadlock saw Franjieh emerge as a presidential candidate.

The Christian parties of the Kataeb, Free Patriotic Movement, and Lebanese Forces have voiced their objection to the manner in which Franjieh's name is being proposed.

His chances to be elected rose significantly in the wake of a meeting he held in recent weeks with Mustaqbal Movement leader MP Saad Hariri in Paris.

Hariri has been spearheading efforts to elect the Marada Movement chief as president even though his ally in the March 14 camp, LF chief Samir Geagea, is a presidential candidate.

Aoun is also a nominee.

So, what Berri is saying here basically, is : "Look Michel Aoun, you simply have to agree on Franjieh as president, or else there wont be any president at all."

He said: “The best scenario to resolve the crisis lies in an agreement between Change and Reform bloc chief MP Michel Aoun and Marada Movement leader MP Suleiman Franjieh.”