Salam: As PM, I am Entitled to Take Preliminary Decision on Joining Saudi Coalition 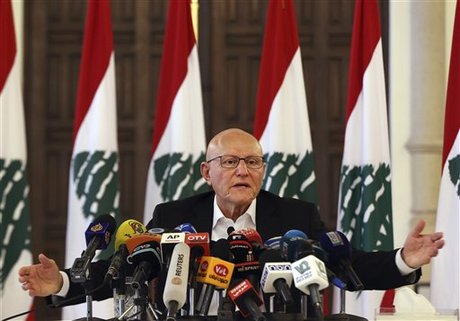 Prime Minister Tammam Salam defended Lebanon's joining of the Islamic alliance against terrorism without informing the majority of political powers, saying that anyone has the right to object to this choice, reported As Safir newspaper on Wednesday.

He told the daily: “I am entitled as premier to take a preliminary decision on Saudi Arabia's invitation to take part in this coalition, especially since cabinet is not holding sessions.”

“No one can prevent me from taking a decision that I deem appropriate and I will assume the responsibility of my actions,” he declared.

“This does not mean that I am overriding the government that ultimately has the final say and executive role in the matter,” Salam said.

Furthermore, he noted that there are no articles in the alliance that demand that Lebanon take part in military action.

“This does not mean that we cannot present security expertise to the coalition, especially since our security and military agencies are waging an open battle against terrorism,” he stated.

In addition, he rejected remarks that Lebanon should not take part in an Islamic alliance because it is neither an Islamic or Christian country, pointing out that Lebanon is a member of the Organization of the Islamic Cooperation and that Lebanon's Christian president is the only Christian who takes part at the organization's meetings.

“It is unacceptable to infringe on sectarian sensitivities in such an affair,” he said.

Labor Minister Sejaan Qazzi had on Tuesday criticized Lebanon for joining an Islamic alliance, saying that the country is neither Islamic nor Christian.

Saudi Arabia announced on Tuesday the formation of the Islamic alliance aimed at combating terrorism.

It includes 35 countries from across the Muslim and Arab world, except Syria, Iraq, and Iran.

Some Lebanese officials welcomed joining the alliance, while others said that they were not consulted over it.

Sometime it's better to ask for forgiveness rather permission.

Lebanon is not a country but a collection of sectarian families forming an illusion of a state. Salam's decision is mainly symbolic and he is getting bombarded with criticism.

It will not be accepted by March 8 most of the cabinet.
The Resistance will not allow the country they protect, to fall into Wahabi hands, Salam dealt his last card.

Now he is out of options.

Bravo PM Salam u must take decision by its eggs...It's only preliminary.........

Even though i a kataebi , i am not a sheep like you . If gemayel takes a decision or a position i don't agree on , i don't just follow him with whatever he says or does ,baaaaaa

Impressive... It might take longer than the waste crisis to come with the final decision.

IMPRESSIVE !!! It might take longer than the waste crisis to come with a final decision...