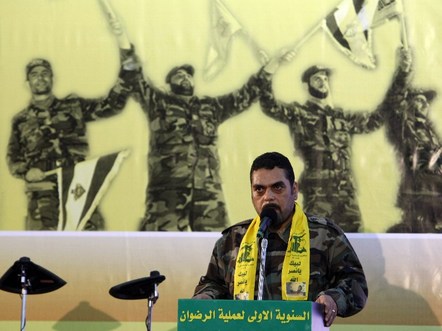 Israel's justice minister Sunday welcomed the death of Lebanese militant Samir al-Quntar but did not claim credit for the air strike in Syria that killed him, which Hizbullah said was an Israeli raid.

The Israeli family of his victims also said "justice has been done."

Justice Minister Ayelet Shaked told army radio that Israel "has not claimed" the strike but "was happy to learn the news."

"He was an arch-terrorist who killed a young girl by fracturing her skull and had continued his terrorist activities after being freed," she said. "It's a good thing he met his maker."

Quntar had denied killing the girl, saying she was killed in the crossfire.

Israel had convicted Quntar of murdering three Israelis, including the four-year-old girl.

He was freed by Israel as part of a prisoner swap in 2008, three decades after the killings, and he became a high-profile figure in Hizbullah.

Israeli Cabinet minister Yuval Steinitz said he was not sorry about Quntar's death but could not comment on the accusations that Israel was behind the killing.

"If something happened to him I think that no civilized person can be sorry. But again I learned it from the reports in the international media and I can make no concrete reference to it," he said.

Israeli Prime Minister Benjamin Netanyahu did not comment about the strike in his weekly Cabinet meeting.

Hizbullah said Quntar was killed on Saturday night in an Israeli air raid near the Syrian capital Damascus.

Israeli media have quoted military sources as saying Hizbullah had put him in charge of the Syrian part of the Golan Heights.

Former Israeli national security adviser Yaakov Amidror noted that Israel has said it will act against weapons transfers to Hizbullah as well as what it sees as preparations to attack Israel.

Quntar "was very active in the north part of the Golan Heights in the Syrian side, responsible for preparing the area for attacks against Israel," he said.

"And if he is neutralized by someone, it's good news for the state of Israel," Amidror, a senior fellow at the Begin-Sadat Center for Strategic Studies, told reporters.

He said however he did not know whether Israel was responsible. Asked why Israel does not claim credit for such incidents, he said it makes it less likely for the other side to retaliate.

Quntar was a teenager when he and three other members of the Palestine Liberation Front infiltrated the Israeli village of Nahariya by sea from Lebanon.

Quntar was sentenced to five life terms plus 47 years for murdering Haran, Einat and an Israeli policeman.

Smadar Haran, Danny's widow, told army radio on Sunday that "justice has been done, especially when we know that he has continued to be active in terrorism against us since his release."

Their second daughter suffocated as Smadar Haran tried to keep the two-year-old from making noise and revealing their hiding spot during the kidnapping of her husband and other daughter.

Danny Haran's brother Ronny told the Ynet news website that Quntar's death is "a small comfort, but it doesn't detract from the pain one bit."

He got what he rightfully deserved. What he is doing in Syria is more horrendous than what he did in Israel.

He was a hero, and he got martyred a legend.
Now your words are only prove, that Israel and Al Nusra/ISIS/Salafi/Revolution are allies.

Makes perfect sense, how come Israel never targets their Al Qaeda brothers in Golan? After all they control a large part of it.
Yet we hear you people talk about Assad and Golan 40 years and so on, here you go Nusra have much control in Golan, let them go fight for Palestine? No, they would never hurt their masters just like March 14 Alliance cowards.

He is a criminal.

He is now in eternal fires where he is surprised to learn that God did not need a Party and never ordered killings in His Name.

one less piece of crap in lebanon.
good bye and good riddance!

here is another Syrian/Iranian bootlicker to add to your ever growing avatar, 3e2bel the rat hiding in the sewers.

A better question would be how come ISIS never targets their Jihadis brothers in Iran?

Yeah Mastica... a real hero... a hero that crashes the skull of a little girl with a rock... admirable and heroic indeed...

Hassouni next on the Hit List, go and them guys...

@Mastica, Northern and all Ebola supporters:

Those who say : "A doorway to Heaven is Jihad" are telling a lie.
The truth is that Warmongers go to hell ...
God is Love and doesn't need anyone to take weapons to defend Love.

And of course God doesn't need a party called "Party of God".

Man has a free choice to decide between Right and Wrong, between Goodness and Evilness, between Love and Hatred. By deciding through hi free will, he determines his fate in Eternal life.
A criminal cannot go to Heaven.

Warmongers are not Righteous people, nor people of Goodness, Kindness and Love....
When YOU decide for now...YOU also decide for Eternity.

Your "friend" is now in eternal fires where he is surprised to learn that God do not need a Party and never orders killings in His Name.

Nobody defines "Legends" as someone who murders children, accept in the sick minds of blind followers, shame on anyone who praises child killers.

Ok Mystic/Southern, how about your very incompetence in 2006? How may of your own children did you not let evacuate when your glorious foreign group started that unnecessary war? Even your own offspring were expendable, and thanks to your immense carelessness, they're dead. Let's not forget what your Ayatollah says too, that includes children, oh right and collateral damage (including children) whenever you bombed politicians and others you didn't agree with you...

Israel kills just as much as your Iranian group, you're both equal and guilty. So quit acting like you're infallible.

John, I don't believe Israel, ISIS, Hezbollah, or Iran. This may come as a shock but really you need to look past your psychiatric black/white splitting.

answer: israel is happy to have a regime that protects the golan for them! it was part of a deal: we let the assad regime if you do not touch the golan... so much for a "resistant" country! my a.... LOLLLLLLLLL

funny coz the hezbi lovers say that isis and nusra are terrorists, which they are, but if they helped palestinians would they still be regarded as terrorists? or are they terrorists because they are fighting their pimp assad?

well they already said that hamas was saudi paid when they approved the syrian revolution! now they want to defend them? LOLLLLLL

Very dirty and shameful of you Southern/Mystic.

You forget your glorious Bashar too....thank you.

Never said he was glorious to me, perhaps you should read a dictionary and brush up before you create another one of your masterpieces.

I gave, problem is you have selective eyes and live in denial, you disgust me. Very pathetic with another fake account, same with your fakeness towards Lebanon.

The very guy this article is about? lol, you disgust me and your fake accounts.

I don't care about you or Zionists, get that through your head, PS nice to see you use your actual account like a good boy :)

Mature, especially with your fake accounts.

I don't work for anyone Sounthern/Mystic my misguided friend. The irony is you are using yet another fake account, which dismisses the point. Very Iranian of you to try to turn it around on the other what you yourself are doing.