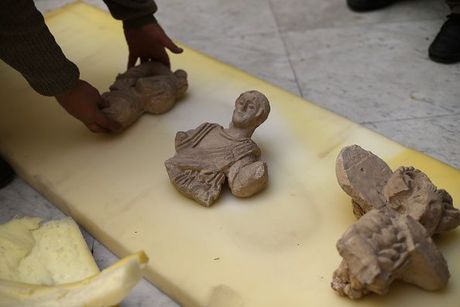 The Islamic State group is using some stores in Lebanon as a front for its smuggling of Syrian artifacts, reported An Nahar daily on Wednesday.

It revealed that a recently arrested IS member had confessed to being related to the owner of a butcher shop in the northern city of Tripoli and that the meat shipments received from Syria are not limited to the products he sells in his shop.

The shipments also include narcotic pills, smuggled artifacts, and gold.

On April 13, the army arrested Syrian Turki al-Falqoun in the eastern city of Baalbek for lacking the proper identification papers.

He was handed over to the Internal Security Forces Intelligence Bureau that discovered after carrying out investigations with him that he was in contact with an Egyptian known as Abou Moatasem, a member of the IS.

Falqoun was found to have visited Egypt, Turkey, and Algeria and he may have had a role in recruiting new members to the IS.

He is also related to a Syrian, identified as Gh.Gh, who owns a butcher shop in Tripoli.

He carries out his trade with Syrian butchers in Homs and Hama, who send him his products on a daily basis.

These products do not only contain meat, but narcotic pills, rare artifacts, and large amounts of gold, said An Nahar.

Explosives have also been smuggled in these shipments.

yaani this is on top of all our problems.. now a syrian butcher with all illegal activities..n related to IS...