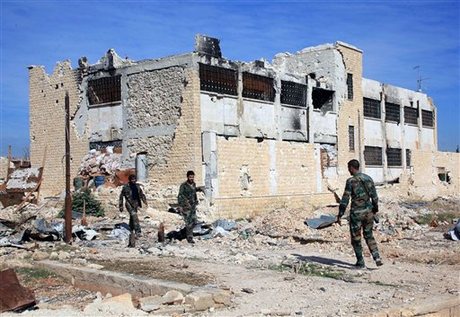 Backed by a wave of Russian air strikes, regime forces have made key advances against rebel positions on the road to Aleppo and the offensive has been blamed for causing the suspension of peace talks this week in Geneva.

The advance -- which has seen the most significant government victories since staunch ally Russia launched air strikes last year -- brings government forces closer than ever to encircling rebels who have held the east of Aleppo city since mid-2012.

Since it began Monday, the offensive has seen troops sever the main rebel supply route from Aleppo city to the Turkish border, allowing them to also end a long-running opposition siege on two Shiite towns on the same road, Nubol and Zahraa.

Government soldiers and pro-regime militants arrived in the towns on Thursday morning to cheering crowds who threw rice and ululated, according to footage shown on state television.

Syria's state news agency SANA reported "mass celebrations in the streets of Nubol and Zahraa welcoming army troops and celebrating the breaking of the siege."

State television showed residents embracing arriving fighters, who fired into the air and waved the flags of the Syrian government and Lebanon's Hizbullah, a crucial regime ally.

The two towns, home to about 35,000 people before the war, had been besieged by rebels since 2012, and reaching them had long been a government goal.

But an even higher priority has been severing rebel supply routes into Aleppo city, which has been divided between opposition control in the east and government control in the west since shortly after fighting there began in mid-2012.

Last February, government forces launched a similar offensive north of the city which stalled shortly after it began.

But this operation was backed by heavy air strikes from Russian forces, who intervened in the conflict to bolster Assad's government in late September.

The Syrian Observatory for Human Rights, a Britain-based monitor, said Moscow's warplanes had launched hundreds of strikes since the offensive began.

The group said some 100 rebel fighters had been killed in clashes and the strikes, along with 64 regime troops.

The government advances leave the rebels in eastern Aleppo city surrounded from the south, east, and north, with only a single opening to the northwest leading to the neighboring opposition-held province of Idlib.

A range of opposition groups are present in the region, including moderate rebels, Islamists and the Al-Qaida affiliate Al-Nusra Front.

"They have lost their main supply route to the Turkish border; the only remaining route is long and complicated, and will be the regime's next target," he said.

He said the government's ranks would be bolstered by some 5,000 pro-regime militants who had been trapped inside Nubol and Zahraa, while rebel forces were struggling to acquire ammunition and weapons.

"The regime has managed to achieve in 72 hours what it failed to for the last three years," he said.

"If the rebels lose this last route, it will be the beginning of the end for them in Aleppo, they will be under complete siege," he added.

Aleppo was Syria's main economic hub before the conflict erupted in 2011 and securing the city would be an enormous victory for the regime.

Analysts Faysal Itani and Hossam Abouzahr of the Atlantic Council said the advances were a "serious blow" to the rebels and showed how Russia's intervention had reversed the regime's fortunes.

"In contrast with its position deteriorating as recently as five months ago, the regime is now well-placed to divide, isolate, and advance on the armed opposition in several key geographies," they wrote on the Council's website.

Karim Bitar, analyst at the Paris-based Institute of International and Strategic Relations, also described the advances as "significant breakthroughs" for the regime.

"It seems to be finalizing the consolidation phase that started with Russia's intervention," he told AFP.

The regime's control of areas of Syria it considers strategically useful "is no longer under direct threat," he added.

Putin will live to regret this day.

Putin will celebrate with Assad when your salafi rebels are finished.
Everytime the salafis try to advance the Russiana bombs them to dust, you should just give up and accept Assads amnesty.

Your wahabi revolution have failed a long time ago, now admit defeat and spare the Syrian people more suffering.

it seems a bit far away from the border villages hezbollah which was the excuse for hezbis to side with assad against the will of the Baabda declaration they signed...

another lie from hezbollah as usual spitting on their promises LOL

"Nearly 40,000 Syrian civilians have fled a regime offensive near Aleppo"

seems the population does not want to cheer their "liberators" LOL

sure 40 000 people is not possible to spot by anyone so sure it must be a lie... pityful idiot you are indeed LOL

sure assad is a saint to you M8ers even if he led to the destruction of his country and the killing of thousands of innocent people... but still you find him excuses... pityful

which innocent civilian would support terrorists if not by force or fear of being killed? ... but still you support the greatest of them all : the assad regime blind to their atrocities equal to those isis caried out on civilians for years! ....

will you say well done HA when the rebels retaliate by blowing up shias in Lebanon?