Doubts Emerge over Plan to End Syria Hostilities within Week 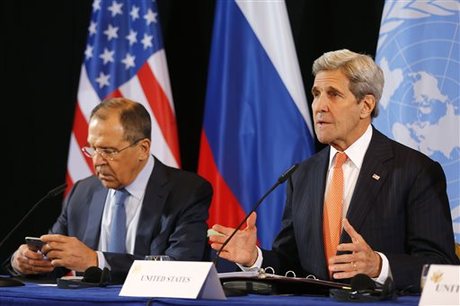 After an ambitious deal to end hostilities in Syria within a week was signed early Friday, doubts emerged over its viability as it excludes the Islamic State group and Al-Qaida's local branch.

U.S. Secretary of State John Kerry admitted there were "no illusions" about the difficulty of implementing a nationwide "cessation of hostilities" between regime forces and rebels as he announced the deal in Munich alongside Russian Foreign Minister Sergei Lavrov.

The 17-nation International Syria Support Group also agreed that "sustained delivery" of humanitarian aid will begin "immediately", with a new U.N. task force meeting later Friday in Geneva to start pushing for much greater access to "besieged and hard-to-reach areas".

The deal, struck in late night talks in Munich, went further than expected, with Lavrov talking about "direct contacts between the Russian and U.S. military" on the ground, where the powers are backing opposing sides in the five-year-old conflict.

But after a fortnight in which the forces of Syrian President Bashar Assad have besieged the key rebel city of Aleppo with the help of heavy Russian bombing, several nations put the onus on Moscow to implement the Syria deal.

"Through its military action on the side of Assad's regime, Russia had recently seriously compromised the political process. Now there is a chance to save this process," foreign ministry spokeswoman Christiane Wirzt said.

Analysts remained skeptical about the chances of ending the bloodshed.

"(The agreement) is ambitious and yet very tenuous... there are huge question marks," said Julien Barnes-Dacey, of the European Council on Foreign Relations.

The failure to include Al-Qaida affiliate Al-Nusra in the cessation of hostilities was particularly important, he said, since the group is active in Aleppo and surrounding regions, and many of the more "moderate" rebels have links with it.

"In many ways this Munich meeting was thrust to the fore by the situation in Aleppo, and yet the conditions of the agreement do not seem to apply to Aleppo," said Barnes-Dacey.

"Talking about Nusra works in the Russians' favour since so many rebel groups have ties to Nusra. This effectively gives the green light for the Syrian government and its allies to carry on military action while paying lip service to the agreement."

Lavrov underlined that "terrorist organizations" such as IS and Al-Nusra "do not fall under the truce, and we and the U.S.-led coalition will keep fighting these structures".

But other analysts struck an optimistic note, saying it was significant that the U.S. and Russia had been able to strike a deal at all.

"It almost reminds one of superpower agreements in the days of the Cold War," said Michael Williams, a former U.N. diplomat in Lebanon at London's Chatham House think tank.

The U.S. and Russia have "taken ownership of this now. This is important. The parties, the opponents will notice this. It will put quite a bit of pressure on Assad and his regime. It's very hard for them now to walk away."

Peace talks collapsed earlier this month over the offensive on Aleppo, which has forced at least 50,000 people to flee, left the opposition virtually encircled and killed an estimated 500 people since it began on February 1 -- the latest hellish twist in a war that has claimed more than a quarter-million lives.

A key Syrian opposition body, the High Negotiations Committee, said Friday it was up to rebels on the ground whether to implement the deal.

Kerry said talks between rebels and the regime would resume as soon as possible, but warned that "what we have here are words on paper -- what we need to see in the next few days are actions on the ground."

A U.N. task force, co-chaired by Russia and the U.S., will work over the coming week "to develop the modalities for a long-term, comprehensive and durable cessation of violence," Kerry said.

The separate aid task force will pressure the Syrian government to open routes, since only around a dozen of 116 U.N. access requests have been granted.

Russia and the West remain starkly at odds on several issues, particularly Moscow's failure to focus its bombing on the Islamic State group.

"We need a lasting ceasefire, we need help to the civilians, we need a political negotiated solution," he said.