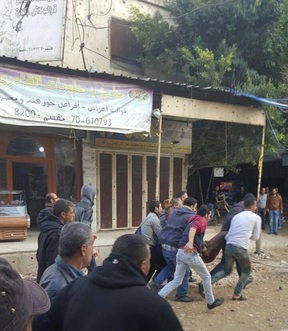 Tensions were high on Monday at the Ain el-Hilweh Palestinian refugee camp in Sidon after an Islamist militant shot dead a member of the secular Fatah Movement and unknown gunmen retaliated by killing the man's brother, state-run National News Agency reported.

The two parties went on alert after the incident, which prompted the Joint Palestinian Security Force to intervene in a bid to contain the situation, the agency added.

Volleys of machinegun fire were heard after the killing and a state of tension was engulfing the camp, the agency added, noting that Palestinian and Lebanese officials were holding intensive contacts to prevent further deterioration.

Sidon MP Bahia Hariri meanwhile held a series of phone talks with a number of Fatah and Islamist officials at Ain el-Hilweh, urging them to pacify the situation.

Such incidents have become frequent in recent years in Ain el-Hilweh, the largest of Lebanon's 12 Palestinian refugee camps.

That has created lawless areas in many camps, and Ain el-Hilweh has gained notoriety as a refuge for extremists and fugitives.

Send them all back.