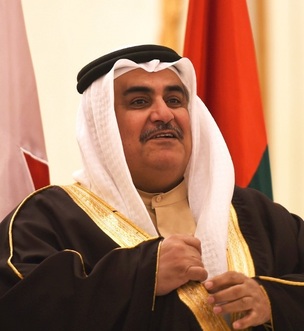 Bahraini Foreign Minister Sheikh Khaled Ahmed al-Khalifah stated on Friday that Hizbullah continues to trigger incitement against his country and endangers its security.

“Lebanon is in our hearts. But there is a threat against the Gulf Cooperation Council countries by Hizbullah which is still inciting and threatening the security of Bahrain,” said the Minister in an interview to al-Mustaqbal daily.

“We adhere to the stance we have taken until that party and Iran change their behavior towards us. We hope they would change their conduct. But up until this moment all we hear are words without deeds.”

On the other hand, the Minister hailed the statement made by Prime Minister Tammam Salam during the Organization of Islamic Cooperation summit in Istanbul saying: “It confirms the deep relations between the GCC and Lebanon.”

On Monday, the Gulf kingdom of Bahrain published a list of 68 Islamist groups it classified as "terrorist".

Hizbullah, already branded as "terrorist" by the Gulf Cooperation Council and the Arab League, topped the list approved by Bahrain's cabinet.

In March, Bahrain's interior ministry announced the deportation of Lebanese nationals over alleged links to Hizbullah.

it also threatens our security.

Because of them the whole Arab world is boycotting us.

Is it not part of the objective of Ebola of destroying Lebanon???

Sheikh Khalid Ahmad Alkhalifah looks mighty healthy, perhaps never missing a meal.
Oppressors of their own people and a stellar human rights record fit to rival savages and they are talking about the hizb triggering incitement in his beloved cesspool. Go figure

lol of course you would say that.

@mowaten E-X-C-E-L-L-E-N-T. Still laughing since the day you declared with a straight face you were a shiaa atheist and also a member of hezbollah with only one account. I think i will also continue to laugh at your statement " hezbollah is a résistance ". Thank you Thank you

Which country are you a mowaten of? Iran, Syria, Iraq... Surely, you are not Lebanese.

To be zionist is no longer an insult compared to what you are...."destroyers of Lebanon"!!!