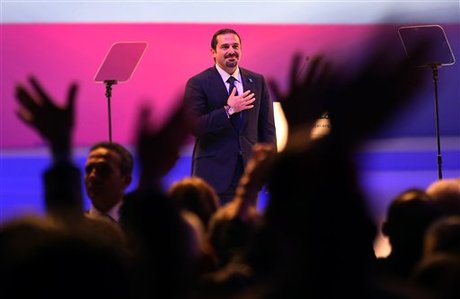 Head of the Mustaqbal Movement MP Saad Hariri remarked on Tuesday that the Syrian people “will be victorious” against Iran and Hizbullah in the ongoing conflict in their country.

He made his remarks in wake of a speech Assad made Tuesday before the newly elected Syrian parliament.

“Assad said he wants to liberate the whole of Syria from terrorism, while he is the greatest terrorist.”

“We will see how terrorism will halt once this criminal leaves Syria because his created the Islamic State group and its affiliates.”

“One thing is certain and it is the Syrian people's victory because they are justified in their fight,” added Hariri.

Assad addressed the new parliament in a speech broadcast on state television on Tuesday, congratulating lawmakers on a record turnout in an April general election.

The vote was held in government-controlled areas only, and was dismissed both by the opposition and internationally as a sham.

Syria's conflict began in 2011 with protests calling for Assad to step down, and several rounds of U.N.-backed peace talks have failed to bring an end to what has become a complex civil war.

Fighters from Iran and Hizbullah have been supporting regime troops in combating the revolt.

Hariri tries to gain a few voters now by playing the hard man, since Rifi the other salafi took all his votes in Tripolistan.

what about the Lebanese people?