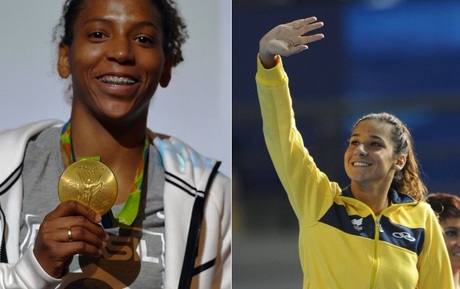 Top Brazilian athletes Rafaela Silva and Joanna Maranhao have hit back at racist and sexist insults that have caused Olympic heartbreak and tears.

Rio gold medal judoka Silva, who was called a "monkey" after crashing out of the London Games four years ago, and swimmer Joanna Maranhao, who has had rape threats in recent days, say they will use the hatred to fuel change.

"This medal is (a response) for all those who said I should be in a cage," said a tearful Silva, who was targeted after being disqualified at the 2012 London Games, but came back in Rio with a stunning win in the 57kg category.

"This can be an example for children from (poor) communities," she said.

Silva was called a "monkey" after her London disaster, but she says the racism against favela slum residents goes far deeper.

"If you are black, people in the street look at you with suspicion. If you go by someone they move their wallet away," the new Olympic champion said.

About half of the 204 million people in Brazil identify as black or mixed race. Non-whites are overwhelmingly represented among the poor and less educated, as well as in the death toll from crime and killings by police.

At its most visible, the racial divide also runs in the Olympic stadiums where whites -- although many of these are foreign tourists -- dominate in the stands and personnel like cleaners and security guards are often black or mixed race.

- Fighting beyond the arena -

The government has distributed pamphlets titled "Olympics without racism" in stadiums and the government tsar on racial equality told a press conference Wednesday that "we need to fight" for change.

Silva hopes her star profile can aid in that struggle.

Back at her low point after London, she almost gave up judo, her father said, and "it wasn't the loss that affected her -- it was the racism.

"It was the racist comments that people posted which hurt her," he said. "She was afraid to look at her computer in case she'd see even worse things written about her."

Now Silva is answering her critics the way she knows best, by showing she is a winner.

"The monkey came out of the cage in London and became champion in Rio de Janeiro," she said Wednesday at the press conference on racial equality.

"Now you have a black who isn't assaulting someone but bringing joy to the Brazilian people. I want to show that we have good things, not just bad, and that's why I'm here," she said.

Maranhao, who is not black, but comes from the heavily black northeast of Brazil, was crudely pilloried Tuesday after losing in the 200 meter butterfly and exiting the Olympics.

"It shouldn't be possible for people to say that they'll rape you or that you should die," she said, crying after her defeat.

Maranhao said she would file lawsuits against those who insulted her. She hopes to use any money from damages to fund a group working against pedophilia, Infancia Libre.

Addressing those who "came here to denigrate, offend, and insult," Maranhao said: "Thank you very much!... Your hatred will be used for a good cause."