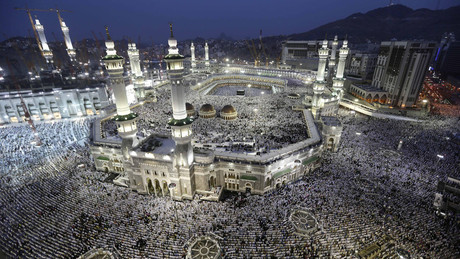 Security forces said the operation was planned by three terrorist groups, two based in Mecca and the third in Jeddah. The foiled attack was targeted at worshipers at the mosque, Saudi-owned Al-Arabiya television quoted security forces as saying.

The first operation was foiled in Mecca's Assila district, while the second was thwarted in Ajyad al-Masafi neighborhood.

A suicide bomber, who was hiding in a house in the Ajyad neighborhood, opened fire on security forces and refused to comply with calls to turn himself in. He later blew himself up after being encircled, wounding six foreign residents and five members of the security forces, the security spokesperson said.

Security forces arrested five suspects, including a woman, who are currently being interrogated.

Is that why vilayet e faqih offered to send Qatar food after the blockade. Or is that why Iran shares a large gas field with Qatar

He works at a gas station in Dearborn, MI. like most shias do.

The shia twelver enjoys the freedom of the USA and condemns it at every juncture. He is also known as jcamerican.