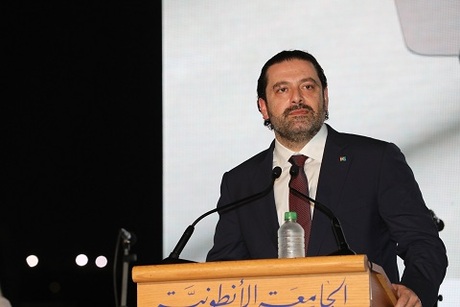 Prime Minister Saad Hariri has hailed "the heroes of the Lebanese army” over the major security operation near the town of Arsal that resulted in foiling terror plots and the arrest of dozens of terror suspects.

“We plead to God to heal the wounded and protect our people in Arsal and entire Lebanon,” Hariri added in a speech at a graduation ceremony at the Antonine University in Baabda.

Seven army troops were wounded and a Syrian girl was killed when five militants blew themselves up and hurled a grenade at soldiers cracking down on two Syrian refugee encampments near Arsal on Friday.

“These days, some are threatening us with importing revolutionary guards and militias,” the premier said.

“These remarks do not reflect the stance of the Lebanese State, and the Lebanese people can protect their land on their own against any Israeli aggression and they don't need any foreign forces or militias regardless of their nationalities,” Hariri underlined.

Nasrallah has warned Israel against attacking Lebanon or Syria, saying "hundreds of thousands" of Arab and Muslim fighters would be ready to strike back.

"The Israeli enemy should know that if it launches an attack on Syria or Lebanon, it's unknown whether the fighting will stay just between Lebanon and Israel, or Syria and Israel," Nasrallah said.

"I'm not saying countries would intervene directly -- but it would open the door for hundreds of thousands of fighters from all around the Arab and Islamic world to participate in this fight -- from Iraq, Yemen, Iran, Afghanistan, Pakistan," he added.

Hizbullah fighters from Lebanon, and others from Iran, Iraq, Pakistan and Afghanistan, are battling alongside regime forces in Syria to defend the government of President Bashar al-Assad.

The powerful Lebanese, Iran-backed group and Israel have fought many battles including a devastating 34-day war in 2006 that killed 1,200 people in Lebanon, mainly civilians, and 160 Israelis, mostly soldiers.

yeah right and you head a cabinet that has Foreign Forces and Militias in it.

Why does he link Lebanon's faith to Syria's? Are we supposed to "defend" Syria in case of an Israeli aggression?? WTF!!! Better shut your mouth Saad! You lost our support a long time ago...