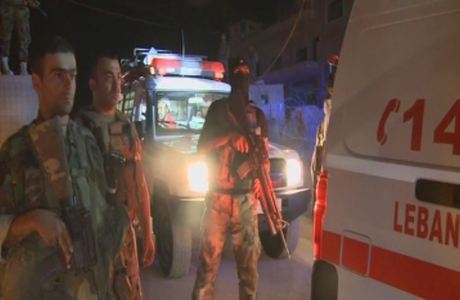 Buses carrying al-Nusra Front militants, their families and scores of refugees began moving from Lebanon's Arsal to Syria's Flita Wednesday afternoon, after the first phase of a Nusra-Hizbullah prisoner exchange deal was finalized overnight with the release of three Hizbullah fighters in return for three Syrian Nusra prisoners.

Hizbullah's al-Manar TV said 113 buses carrying around 8,000 militants and refugees were moving into Syria. The evacuees include Nusra's leader in the area Abu Malek al-Talli.

Twenty ambulances were escorting the buses, amid measures by the Lebanese army, General Security and the Lebanese Red Cross.

Several media outlets including NNA said al-Nusra took out one of its militants, Raad al-Ammouri, from one of the buses before executing him with gunshots in front of the civilian refugees.

General Security chief Maj. Gen. Abbas Ibrahim, who is playing a key role in the negotiations, assured that all three Hizbullah fighters were in good health.

Hizbullah's three captives were kidnapped when they lost their way during the ceasefire between Hizbullah and Nusra that followed the battles in Arsal's outskirts last month.

They were identified as Mahmoud Harb, Hussam Fakih and Hafez Zakhim, NNA added.

Lebanon's General Security, the Lebanese army, the international Red Cross and international bodies were supervising the transfer of militants and refugees.

Before leaving Arsal's outskirts, the militants burned the sites they used to occupy as well as their medium- and heavy-caliber weapons.

The final part of the deal includes the release of another five Hizbullah captives -- captured in Aleppo in 2015 -- upon the arrival of the convoy of buses at a crossing that had also witnessed a deal to evacuate civilians from the Syrian towns of Foua and Kfarya in Aleppo province.

On Tuesday, the evacuation ran into several hurdles and the process was postponed to Wednesday.

Demands made by al-Nusra related to the release of around 20 Nusra inmates from the Roumieh Prison were reportedly among the hurdles.

The exchange and evacuation deal comes in the wake of a military offensive by Hizbullah fighters and Syrian troops during which they captured border areas between the two countries and left hundreds of Nusra fighters besieged in a small rugged mountainous area.

The fighting ended with a ceasefire on Thursday.

So, in the end it was 120 Nusra fighters that were going to conquer Lebanon!

yes but they were 20,000 to start with ( or so we were told by the iranian war media ) before the terrorist hezbollah killed 19,880 of them.

"Three Nusra prisoners from Roumieh prison -four non-convicts and a fifth who has finished his jail term- were swapped for Hizbullah captives."

Looks like everybody is dancing to their tune. Failed state. We are doomed

but the scum remains in dahieh.

Meanwhile back in Baalbeck the Captagon industry flourishes