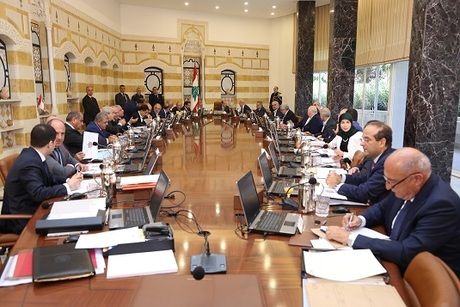 The Cabinet on Thursday stressed its keenness on Lebanon's ties with Kuwait in connection with a Kuwaiti letter of protest over alleged Hizbullah involvement in a terror cell in the Gulf emirate, as some ministers objected against a decision to replace the head of the State Shura Council, Judge Shukri Sader.

“President Michel Aoun gave a briefing about the economic and financial situations based on information and reports from specialized financial institutions, noting that it is necessary to approve an economic plan and begin implementing it as soon as possible,” Information Minister Melhem Riachi told reporters after the session.

The president “also addressed the Kuwaiti memo, as the Cabinet emphasized the firmness of the relation with the State of Kuwait, stressing that it will follow up on the memo out of keenness on the strength of the relation between the two peoples.”

Separately, the Cabinet appointed Judge Henri Khoury as head of the State Shura Council, replacing Judge Shukri Sader, a move that was met with reservations from the ministers of the Marada Movement and the Progressive Socialist Party.

“Will they fire anyone who does not endorse the policies of the new presidential term?” Fenianos wondered regarding the decision to sack Sader.

Hamadeh for his part voiced surprise that Sader's replacement also has one year left to serve before retirement, while noting that he had also voiced objections against the OGERO appointments together with Deputy Prime Minister Ghassan Hasbani.

Justice Minister Salim Jreissati, who is close to Aoun and the Free Patriotic Movement, meanwhile noted that Sader was appointed as the head of a chamber in the Court of Cassation, “which is equivalent to his previous post” as head of the State Shura Council.

we want to know who's pro and who's con in the gouv.