Army Prepares for Assault's 4th Stage, Deploys in Areas Liberated from IS 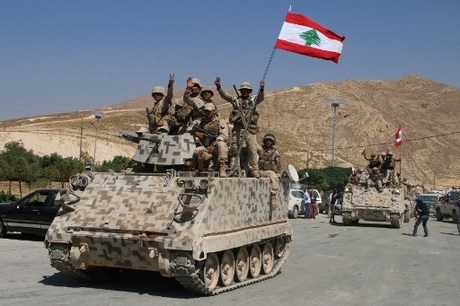 The Lebanese army began Wednesday morning a deployment operation in eastern border areas liberated from the terrorist Islamic State group, as it started preparations to launch the fourth stage of Operation Dawn of the Outskirts, an army statement said.

Engineering units were excavating new routes and searching for landmines and explosives, the statement added.

The Army Command stressed that “there will be no ceasefire with the terrorist groups until they are completely routed.”

Separately, the army announced the death of 31-year-old First Sergeant Walid Mahmoud Freij after he succumbed at dawn Wednesday to wounds sustained in an August 19 landmine explosion in Ras Baalbek's outskirts.

The army had announced Tuesday that it became in control of 100 out of 120 square kilometers of territory previously held by IS after capturing several strategic hills and areas throughout the day.

ado just opened the love bazaar for the army.

when it comes to loving the army, no-one can outbid a shia like ado and his likes.

lol @ "I respect what Hezbollah has done for Lebanon"

What is it that you respect: the wars they caused or the economic disasters they brought upon the country; or perhaps their wars in Syria, Iraq, Yemen, and Bahrain.

Hezbollah has done nothing for Lebanon and everything for Iran.

Maybe Janoubi, we should celebrate the death of our patriotic lebanese armed forces soldiers? Do you celebrate it ya Janoubi?

your hizb brought these people to Lebanon. As to your unwelcome sarcasm, writing how much you love the army on a forum does not make you patriotic. I have members of my family in the army but i am sure you love the army more than anyone else here because you post it on naharnet.

no point arguing with these hypocrites. This is a guy who claims he loves the army more than anybody else yet his fake love for the army also allows him to love a sectarian militia even more than the army. A militia that pledges allegiance to a foreign country, is armed and supplied by a foreign country. The word respect is alien to his love.

"I respect that they have stopped ISIS and Al Qaeda (al Nusra) from invading and assaulting The Lebanon! "

No faithful hezbo, it was the LAF that safeguarded the nation from ISIS and its likes.

Just watch the video and laugh. These terrorists were laughing, joking and using their mobile phones after they "surrendered" to ado's hezb.

Hezbollah only fought the FSA with brutality and murdered injured FSA in cold blood.
Watch DNA below from 6:00 into the video.
DNA - 21/08/2017 حزب الله..وكذبة التنسيق مع الجيش
https://www.youtube.com/watch?v=47y54aNcUTc