SGBL Supports the Embellishment of the Walls of Tripoli Public Schools 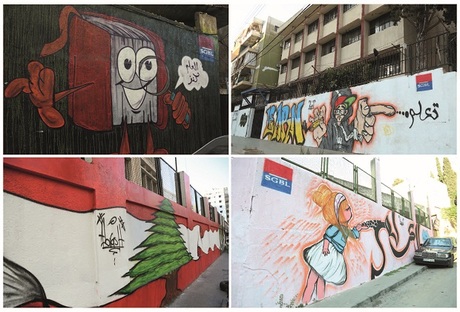 Solidarity being a major focus of SGBL's sponsorship policy and as part of its actions of social responsibility, SGBL committed in the project of embellishment of the walls of the schools of Tripoli, North Lebanon, in order to contribute to improve the daily life of the populations of the neighborhood, a press release said.

Nazih Yassine and Mohammad Abrash both from Tripoli, respectively from Beb el Tebbeneh and Jabal Mohsen, have launched an initiative to beautify the walls of public schools in their area, often decrepit, not always pleasant to look at, blackened or covered with posters. With his stencil and paint spray, graffiti artist Mohammad Abrash drove around the roads and used his talent and creativity to create colorful graffiti.

With the support of SGBL and in collaboration with the Ministry of Education, some 15 public schools in Tripoli have been "redecorated" from the outside and more than 100 young students participated in street art workshops. By placing a certain form of art in the public space, this initiative has given a new perspective on these troubled neighborhoods and helped to inject positivism among the inhabitants of these areass, and more particularly among young people, who were delighted to see their environment embellished.

Commenting on this initiative, Antoun Sehnaoui, Chairman and CEO of SGBL, said: "We were seduced by this citizen initiative aiming to bring, through the art of graffiti, a little optimism, life and colors and change - even if only a little bit, the face of these underprivileged neighborhoods”.

Following the success of this operation, SGBL decided to expand the operation by renewing its support to the duo who is moving towards the public schools of Akkar before the end of 2017, and soon more schools in other regions from Lebanon.