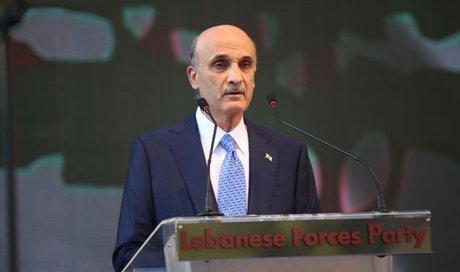 Geagea was replying to remarks made by Saudi Foreign Minister Adel al-Jubeir who accused “Iran of using its ally Hizbullah of laundering money” through Lebanon.

“I appreciate Jubeir's remarks but I have another opinion regarding Lebanon's banking sector. Lebanese banks are in full compliance with the Central Bank's instructions, which in turn is in full coordination with the US Treasury Department,” clarified Geagea.

The Saudi minister said during a conference held in Italy that “Iran is harboring and facilitating the movement of terrorists, establishing Hizbullah in Lebanon, using it to launder money and smuggle drugs.”

The US House of Representatives have backed new sanctions on Hizbullah in October. It came nearly two years after the Hizbullah International Financing Prevention Act -signed by former US President Barack Obama- that imposes sanctions on banks that knowingly do business with the group.

Washington has labeled Hizbullah a global terrorist group since 1995.

Turning to what was described as “strained” relations between the LF ally of al-Mustaqbal Movement, Geagea assured that things will return to normal.

"Most likely it will return back to normal,” he said revealing that extensive consultations are taking place between the two sides to repair the relationship.

Sorry Geagea; you don't know what you are talking about. Hezbollah does use the Lebanese banking system to launder money and finance terrorism.

Let your wife take over.