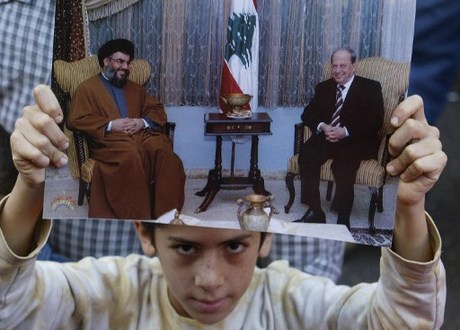 Hizbullah on Monday expressed “utmost keenness” on its 2006 memorandum of understanding with the Free Patriotic Movement, its main Christian ally.

Marking 12 years since the MoU was signed, the party issued a statement stressing “the importance of this historic event.”

The memorandum “carved a new path on the Lebanese arena and it has proved effective throughout all the stages that Lebanon has gone through – from the hostile July war in 2006 to the war on terror over the past few years to the various events that the country witnessed throughout more than a decade,” Hizbullah said.

“This agreement, which brought together the hearts, minds and wills of two large and essential Lebanese groups, had a decisive impact in terms of achieving security, civil peace and political stability,” the party noted.

It pointed out that the “Mar Mikhail agreement was not a mere meeting between political leaders but has rather proved over the past years that it was an opportunity for major rapprochement, engagement and confidence between the popular bases of Hizbullah and the FPM.”

“This gives this understanding a greater importance and makes it a gateway for bringing together all Lebanese in a manner that turns Lebanon into an accord and understanding arena. That's why it is important to show utmost keenness on preserving this agreement and maintaining it in the face of foreign forces that sought and are still seeking to strike it and undermine it,” Hizbullah urged.

And underlining its “full commitment” to the MoU, the party called for “continuing its implementation to achieve the grand goals and create a better future for Lebanon and its sons.”

The landmark agreement was signed by Hizbullah chief Sayyed Hassan Nasrallah and the FPM's founder, President Michel Aoun, during a Feb. 5, 2006 ceremony at the Mar Mikhael Church in the Beirut southern suburb of Shiyyah.

In a recent interview with the Magazine weekly, FPM chief Jebran Bassil said “the alliance with Hizbullah is still ongoing” but this does not mean that the two parties “have become one and the same.”

“We are in agreement on the foreign issues and we will remain a guarantee for Hizbullah inside Lebanon should the country face an aggression from Israel or terrorist groups. But unfortunately, in the domestic files we are encountering choices that do not contribute to building the state in Lebanon,” Bassil lamented.

“Corruption is eating us up and we cannot keep it as it is. The MoU includes a key clause about building the state and we regret that this clause is not being implemented for strategic considerations. We care about the unity of Christians but not at the expense of the state,” Bassil added, in an apparent jab at Hizbullah's alliance with the Shiite AMAL Movement.

Bassil's remarks were published amid skyrocketing tensions with AMAL sparked by his labeling of the movement's leader and parliament speaker Nabih Berri as a “thug” in a leaked video.

The FPM-AMAL tensions triggered three days of street protests and unrest that reached the extent of encircling the FPM's headquarters in Sin el-Fil's Mirna Chalouhi area. The FPM also accused supporters of AMAL of firing in the air in the town of Hadath, an FPM bastion.

And underlining its “full commitment” to the MoU, the party called for “continuing its implementation to achieve the grand goals and create a better future for Lebanon and its sons.”

lol @ create a better future for Lebanon and its sons!

How about you realize that you had your chance and you lost? This is our time now not yours.

Time for the Iranian anchor babies?

Even Prime Minister Hariri knows that

It is uncanny how as soon as brother Mystic returns all his lewatonian friends come with him, no pun intended. BTW if you guys were asking yourselves why was brother Mystic AWAL for weeks, was he sick or something. The answer is NO!!! Besides the couple of days when he was in the streets of Hadath and Mirna el Chalouhi, defending the honor of brother Nahih, brother Mystic was performing his Jihadi duty right here with me in the sewers along with other Resistance men patrolling and guarding the sewers so the Zionists don't steal all our caca. You guys should be thankful to the Resistance, brother Mystic and his fellow Resistance Jihadis who put their lives on the line so our children, their children's children and for generation to come would still have caca. If the Resistance lasts for 1000 years men will still say "This was their finest hour".

Why do they pretend to care for Christians?

The so called MOU between the terrorist iranian group and the change and corrupt movement is a cover for the illegal weapons in exchange for power and corruption.