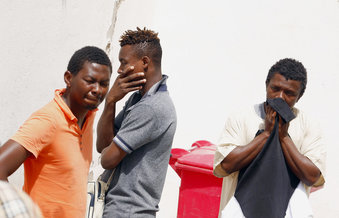 A migrant died early Friday as Tunisian security forces clashed with a group of Tunisians and Africans embarking on a clandestine sea crossing to Italy, a security official said.

The police intervened to stop a boat that had been launched off the coast of the central city of Sfax at around 2:30 am (0130 GMT), said Tunisia's National Guard spokesman Houssemeddine Jebabli.

He said passengers on the vessel had thrown Molotov cocktails at security forces before setting fire to the boat and attempting to flee.

Four Tunisians were arrested along with eight migrants from the Ivory Coast and two from Congo, he said, adding that one of them was hospitalized for burns without specifying which one.

A 15th passenger was found dead, and operations were underway to find any other bodies from the boat.

A growing number of Tunisians are embarking on risky journeys across the Mediterranean Sea to seek work and a better life in Europe.

In the first half of 2018, nearly 2,660 people were arrested in Tunisia during attempts to make the crossing, Jebabli said, compared with just 564 over the same period the previous year.

Several deadly shipwrecks have taken place in recent months, including one on June 3 that killed 87 people.