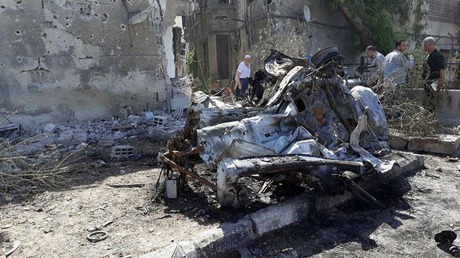 A car bombing claimed by the Islamic State group killed five people, including three children, in a Kurdish-held town in northeast Syria on Wednesday, a war monitor said.

The explosive-rigged vehicle detonated in al-Qahtaniya, a town in Hasakeh province, said the Syrian Observatory for Human Rights, a Britain-based monitor.

Hoker Arafat, a security official, said the bomb was detonated remotely in front of the town post office.

"Three children were killed in the bombing because it was very close to a primary school," he said.

A member of the local security forces was wounded in the attack, he added.

IS claimed the attack on its Telegram channel.

The jihadist group routinely claims attacks in northeast Syria, despite its territorial defeat earlier this year.

Such attacks have included arson against wheat fields and deadly car bombs.

The SDF, backed by the war planes of a U.S.-led coalition, announced the end of IS' self-proclaimed "caliphate" in March in the village of Baghouz, in Syria's far east.

The country's war has killed more than 370,000 people and displaced millions since it started in 2011 with the brutal repression of anti-government protests.