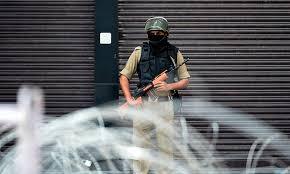 At least 500 incidents of protest have broken out in Indian Kashmir since New Delhi revoked its autonomy more than three weeks ago, a senior government source told AFP Wednesday, as authorities promised to create 50,000 jobs in the restive region.

The Himalayan valley is under a strict lockdown, imposed hours before India's decision to bring Kashmir under its direct rule. Movement is restricted and phone and internet services have been cut.

The lockdown, as well as the deployment of tens of thousands of extra troops to reinforce the 500,000 based in Kashmir, was ordered amid fears of unrest in a region where separatists have waged an armed rebellion against Indian rule since 1989.

But protests have broken out, including in the main city of Srinagar, with police using pellet guns and tear gas to disperse the crowds.

A senior government source told AFP at least 500 protests and incidents of stone throwing have occurred since August 5, with more than half taking place in Srinagar.

Nearly 100 civilians have been injured so far, with a further 300 police and more than 100 paramilitary troopers hurt, the official added.

"The number of protests could be much higher and bigger without the blockade in force," the official told AFP, adding that "anger and public defiance is constantly rising."

"Efforts for easing the conditions are made all the time but nothing seems to be working for now. There is nervousness spreading in the security establishment."

Jammu and Kashmir governor Satya Pal Malik said Wednesday the lockdown was necessary because "every Kashmiri life is valuable to us".

"There has been no civilian casualty, only the few who got violent were injured, these also have below the waist (non-fatal) injuries."

AFP has spoken to relatives of three people they alleged died due to violence from the security forces, including a man and woman who died in separate incidents after tear gas was released near them, and a teenager who drowned while being chased by police.

Malik added that the decision to revoke autonomy -- which will allow non-residents to buy land and apply for government jobs in the region -- would "change the face of Kashmir in six months".

He vowed to preserve the "identity, language, culture and heritage of Kashmir", which locals fear will be diluted if there is an influx of migrants from other parts of India, and create 50,000 jobs in the next few months.

The lockdown would be eased gradually, although internet services will continue to be suspended for some time, he said, stressing that the web was being used by agitators.

The Supreme Court on Wednesday gave the government one week to respond to a legal challenge calling for an end to the communications blackout to allow for media reporting.

The court also said several petitions challenging the removal of the constitutional clause on Kashmir's autonomy would be heard in October.

In Srinagar, residents are refusing to resume their normal lives in an act of defiance, an AFP reporter said.

While authorities have reopened schools, students have stayed away. Told to keep open all day or "don't open at all", some shops have remained shut.

At least 4,000 people have been detained across the valley, security and government sources told AFP last week, with a few released since then.

Another senior government official told AFP Wednesday that at least 1,350 protesters -- described by police as "stone-pelters" -- have been arrested since August 5.

Meanwhile in Muslim-majority Kargil, activists said the town was observing a "complete shutdown" on Wednesday and Thursday to protest against its separation from Kashmir.

New Delhi's move will split the state into two territories, with Kargil becoming part of the Ladakh region and Jammu and Kashmir forming the second territory.

"The authorities promised to negotiate with us since the majority of the people in Kargil want to stay with Jammu and Kashmir," Sajjad Hussain Kargili told AFP.

But no officials had met with local leaders so far, he said.