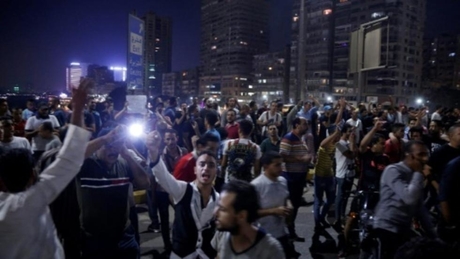 Egypt has detained two prominent activists who played key roles in the 2011 revolution, activists and a rights group said, the latest in a wave of arrests in recent weeks.

Mohamed Salah wrote on his Facebook page that shortly after meeting Abdel Fattah "two cars full of plainclothes police officers took her in one car and me in another."

He added: "They left me after an hour on the highway after they blindfolded and beat me."

Abdel Fattah is best known for co-founding the 6th of April movement in 2008.

The youth movement was instrumental in mobilizing millions of Egyptians in the uprising that toppled long-time autocrat Hosni Mubarak in 2011.

Abdel Fattah's whereabouts is currently unknown, according to local watchdog group, the Egyptian Commission for Rights and Freedom.

Abdallah Said, another political activist and official with the opposition Bread and Freedom party, was also detained from his home early Sunday, according to a note posted by his party on social media.

Other officials from the leftist party have also been rounded up in recent weeks.

Authorities have not commented to AFP about the recent arrests.

In the last three weeks, authorities have detained about 3,000 people, including well-known academics, activists and lawyers, according to rights groups.

Activists say the crackdown is one of the worst since President Abdel Fattah al-Sisi took power in 2014.

While some detainees have been released, no high-profile figures have been freed, according to a list maintained by rights monitors.

The sweeping arrests came after rare protests in September called for the removal of Sisi, in defiance of a ban on demonstrations.

The small-scale protests followed online calls by an Egyptian businessman living in Spain, who accused the president and military of rampant corruption.

And in parliament, Prime Minister Mostafa Madbouli praised how authorities handled the protests saying, "we haven't heard of any breaches".